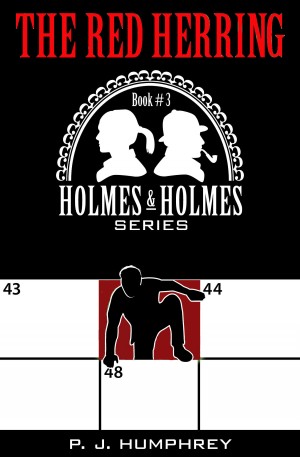 The Red Herring (3rd book in the series Holmes and Holmes)

By P. J. Humphrey
Follow our characters Sherry Holmes, Sherlock Holmes and Doc Watson as they investigate the strange circumstances behind a San Francisco pawnbroker who has been offered big bucks to play crossword puzzles. More
Mark (Doc) Watson tells Sherry and Holmes about a pawnbroker named Goodnight who gets paid $200 an hour to work crossword puzzles. They interview the man and learn he got the job at his assistant’s urging due to his having red hair. Then, because Holmes insists there must be a crime involved, Sherry and Watson follow his assistant to learn more. When the clues lead to an expensive jewelry store behind the pawnshop, both Tessa and Sherry’s actress mother, Fenella, get involved. Then Goodnight loses his cushy job, time is running out, and suddenly Labor Day is the missing link.

My credits include nineteen published romance novels, several short stories, and articles to national magazines. I was an RWA Golden Heart finalist, won the San Diego Book Award, and was a finalist in St. Martin’s Press Malice Domestic Mystery Contest in 2012. I have a novella in Kindle worlds and three novellas about Sherlock Holmes under the name P.J. Humphrey.

Plus, my non-fiction book was published by John Wiley & Sons, I have ghost-written three non-fiction books and had two 30-minute radio plays produced by American Radio Theater.

I'm listed in Who’s Who, a member of Mensa, married and the mother of three children.

You have subscribed to alerts for P. J. Humphrey.

You have been added to P. J. Humphrey's favorite list.

You can also sign-up to receive email notifications whenever P. J. Humphrey releases a new book.