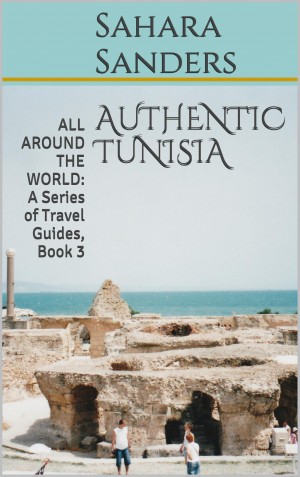 Authentic Tunisia (All around the World: A Series of Travel Guides, #3)

By Sahara Sanders
Tunisia has to offer many historical evidences of different cultures including remains of Ottoman, French, Roman and Carthaginian culture. More
Settled on the northernmost spot in Africa, Tunisia has always been a welcoming land throughout the entire history of the world. Because of this, there is a lot of historical evidence of the many different cultures who have inhabited Tunisia.

If we had to say just one sentence about Tunisia at the moment, we would mention that this country, although beautiful and inhabited by great and pleasant people, is not safe for tourists at the present time.

Let us all hope that Tunisia will soon get back to the peaceful times of past!

Sahara Sanders is a modern writer of several genres.

She is originally from Europe, perceiving herself as a citizen of the world.

She wrote her first short poems at the age of six, then didn’t write again until she developed a fondness for creating stories at the age of ten. Two or three years later, the young writer’s narrations were noticed by her schoolteacher, and, with his inspiring encouragement, she continued to compose stories over her remaining school years.

During her first romantic relationship with a boy from another grade level, she started keeping a diary about her thoughts and experiences. That diary formed the basis of her novel “A Dream of Two Moons,” the title of which comes from some paranormal occurrences from real life.

Ms. Sanders completed high school and was awarded a gold medal, having achieved the highest grades in all subjects during her eleven years of study.

Then adult life began, and there seemed to be no room for scribing, until she fell in love again in 1993. That relationship resulted with a couple of hundred new poems that made up most of a poetry book called “Obsession,” published many years later.

In 1997, Sahara had some spare time and turned back to writing narratives, when she was expecting a child, completing some chapters of an adventurous autobiographic novel for children and teens called “Gods’ Food.” It is a collection of memories about funny stories from her childhood.

During the next fifteen years, she occasionally returned to writing, completing some chapters of a novel entitled “Alexandrite.” This work is planned to be published next year, along with another book, “The Eye of Universe.”

Since 2013, she is once again in the world of books. Having accumulated an immense amount of useful information about different spheres of being, the author considers it part of one’s life’s mission to share experiences with others.

In 2014, her series “Win the Heart of a Woman of Your Dreams” was published, along with a cookbook, “Best Recipes from Eastern Europe.”

New for this year, is the “Slim and Healthy You” guide.
Furthermore, there are two new non-fiction novels being translated and coming soon.

Sahara speaks five languages, and writes books in three of them. English is not native to her, but it is one of her favorites—that’s why, even having only been self-educated in the language, she reached a high level of fluency and was able to work as an interpreter for many years.

In University she earned a Masters’ in Economics, and successfully completed a number of courses on subjects that match her wide-ranging interests.
Ms. Sanders has extensive experience in managing different kinds of businesses, which she did while also working as an interpreter for roughly twenty years in total.

Her interests include: writing, psychology, gardening, the art of bouquet-making, landscape and interior design, pets, travel, cultures of the world, foreign languages, clothing design, photography, modeling and other different hobbies that can be used as tools and methods to learn about, express and describe at least some of the wondrous beauty of life for those who were born on this little planet.

AUTHENTIC TUNISIA
A Travel Guide to Tunisia by Sahara Sanders

You have subscribed to alerts for Sahara Sanders.

You have been added to Sahara Sanders's favorite list.

You can also sign-up to receive email notifications whenever Sahara Sanders releases a new book.