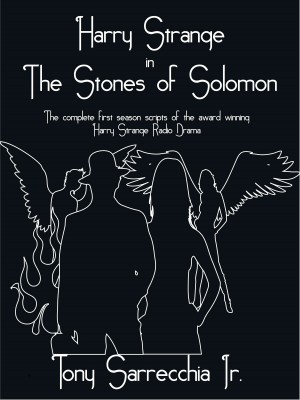 Harry Strange in The Stones of Solomon

By Tony Sarrecchia Jr.
'Harry Strange in the Stones of Solomon' is the collection of the first season radio play scripts of the award winning Harry Strange Radio Drama. This homage to the radio serials of the 30s and 40s has been called a mash-up between 'Your’s Truly, Johnny Dollar' and 'Constantine', and will keep you entertained with every whiskey-soaked adventure. More
"Magic and magical people--the 'unnatural order' is all around us. There are benevolent witches, malevolent witches, demons, vamps, werewolves, shape shifters, ghosts; it's a protoplasmic party of creature features out there. But unless you know where to look, you won't find them. I know where to look. My name is Harry Strange."

A beautiful woman walks into Harry's office and asks him to recover some property stolen by her ex-lover. Harry surmises two things, she's not telling him everything, and she's rich. He takes the case. Much later, he'll discover those 'little stones' can mean the end to creation.

Along the way to saving the world Harry fights demons, the mistress of nightmares, vampires, werewolves, Lilith, and a horrible little troll of a man named Mr. K.

For the first time in print, the first season of The Harry Strange Radio Drama.

These are the original, uncut scripts from the award winning Harry Strange Radio Drama. Episodes in this edition:

This 398-page volume includes a Forward by the Sonic Society's Jack Ward and a Brief History of Harry Strange by Tony Sarrecchia.

Tony Sarrecchia is a storyteller whose tales include the award-winning Harry Strange Radio Drama podcast, a full cast, supernatural thriller; radio drama adaptation of science-fiction and steam-punk novels; a short story of unlikely apocalypse survivors; and a novella about a rabies outbreak in a major city.

Tony worked as a trainer and presenter as well as a bouncer, disc jockey, sales manager, and electronic warfare systems specialist. He often appears as a guest at conventions and talks about writing, producing, and B-movies. He is a member of the Horror Writers Association.

He was lucky enough to marry his muse. He has two children, and lives in Atlanta with his wife and two rescue dogs: A boxador and a pit bull.

You have subscribed to alerts for Tony Sarrecchia Jr..

You have been added to Tony Sarrecchia Jr.'s favorite list.

You can also sign-up to receive email notifications whenever Tony Sarrecchia Jr. releases a new book.