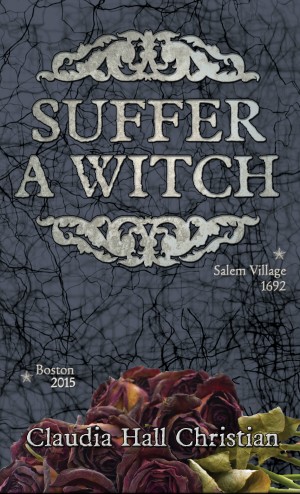 By Claudia Hall Christian
Rated 5.00/5 based on 1 reviews
They call her "Em." Em is for Martha. Em for "Emogene Peres," the name she received in Boston less than a day after she'd been hanged in Salem Village in September 1692. In the hours after death, Em and most of those hanged as Salem Witches were transformed into immortal witches. Now, they live, work, and love in modern Boston. Readers say: "Suffer a Witch is awesome!" More
Readers say: Suffer a Witch is "awesome" and "addicting."

They call her "Em." Em is for Martha. Em for "Emogene Peres," the name she received in Boston less than a day after she'd been hanged in Salem Village in September 1692. In the hours after death, Em and most of those hanged as Salem Witches were transformed into immortal witches. Three hundred and twenty-two years later, they live, work, and love in modern day Boston, where Em runs a spiritual store called the Mystic Divine, just off the Boston Commons.

On the anniversary of the first hanging, June 10, 2014, Em learns that a young man and a team of ghost hunters have dedicated themselves to finding the crevice where the Salem Twenty's bodies were stuffed after hanging. The problem is that Em and the rest of the Salem Twenty are making full use of their skeletons. What starts with a young man with big ideas brings the Salem Witches face to face with their toughest challenge -- their own demons.

In Suffer a Witch, you will meet the Salem Witches as you've never seen them. Through their eyes, you get a sense of what happened all those years ago. Their stories will move you to tears and make you laugh out loud. Join them as they face a battle they have prepared for their entire lives.

Suffer a Witch is filled with all the things you've come to expect from Claudia Hall Christian — great characters, heart pounding love, and more than a dash of fast-paced adventure.

First 20% Sample: epub mobi (Kindle) lrf more Online Reader
pdb
Price: $4.99
Free! USD
Buy with coupon Use the code AG100 at checkout to get this book for free during our site-wide promotion!
(Offer good through May 31, 2020 )
Have a better coupon?
Add to cart, then apply your coupon
Add to Library Give as a Gift
How gifting works
Create Widget
Tags: romance mystery historical fiction boston salem witch trials
About Claudia Hall Christian

Claudia Hall Christian writes stories about good people caught in difficult situations. Her stories are addictive, heart pounding, and intense. She is the author of the Alex the Fey thriller series, the Queen of Cool, the Seth and Ava Mysteries, Suffer a Witch, Abee Normal Paranormal Investigations, and the longest consecutive serial fiction ever written, Denver Cereal. She lives in Denver where she keeps bees, gardens, hangs out with her Plott Hounds, and husband

Such a wonderful read. I learnt so much with Claudia's weaving of fact and fiction. I loved the way she made the story enthralling to the last. I love all her work and this was the latest piece I have read and have not been disappointed in the least.

You have subscribed to alerts for Claudia Hall Christian.

You have been added to Claudia Hall Christian's favorite list.

You can also sign-up to receive email notifications whenever Claudia Hall Christian releases a new book.