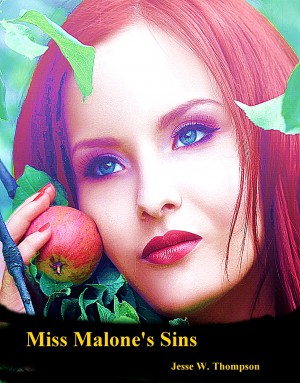 By Jesse W. Thompson
Molly Malone, from San Francisco, goes to Iowa to learn something of her family's roots. After she graduates from the University, she agrees to teach for two years in the corn-fed town of Hoover with its generally bigoted eye on life and a particularly sharp eye on its teachers. Miss Malone breaks the mold.

After service in the Navy during WWTwo, I finished college on the GI Bill, then went on to Luther Seminary in St. Paul for three more years; from there as a pastor to Fairbanks, Alaska, then to a tour of duty as a Navy chaplain in San Diego and the Far East, followed by pastorates in Washington, California, and Minnesota.
The more I learned, the less I believed of the hard-nosed doctrines of most religions and the denominations within those religions. I resigned from active involvement as a minister.
Through all the years, I wrote, traveled, studied, entertained, MC'd banquets at conventions, did a few TV commercials, some theater work, and I continue to read, to learn, and to write as the years fly by.

You have subscribed to alerts for Jesse W. Thompson.

You have been added to Jesse W. Thompson's favorite list.

You can also sign-up to receive email notifications whenever Jesse W. Thompson releases a new book.