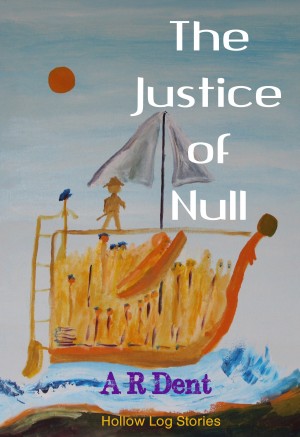 The Justice of Null

The year is 1857, two years before Queensland is proclaimed a State. Terrence Null had been given 500 acres to keep him away from Sydney town. The scene is now seven years later and things have changed in Australia’s politics. Because of Terrence Null’s past, mayhem turns the village of Null into a story of lies, deceit, and plans of a rebellion by women to run a republic in the village of Null. Terrence Null was honest in a sort of a way, if it suited him, and planned a way of teaching the ex-convicts a lesson. What happens reveals all the social issues confronting every major power in the world, during the 1800s, unfolded one day at a time. Each day life produced evidence of just what was the justice of Null, Terrence Null.
This is book one of Hollow Log stories. Book two is Ocker Oscar. Book three is To Kill a Bunyip. Terrence Null and his descendants in three stories in different genres; Satire written in Myth Fantasy and Alternative history. One wonders if Terrence Null did exist.
Download: epub mobi (Kindle) txt
Price: Free! USD
Add to Library
Create Widget
Tags: satire australia alternative history australian australian author australian history 1800s queensland author satire on power satire of history queensland history
About A R Dent

A.R. Dent was born in 1945 in Sydney and lived at a beach side suburb. After a turbulent/quiet contrasting early life A.R. Dent then spent time travelling before settling down for a business and professional life.
'Been there - done that' about sums up his life.
A Professional Artist and now also including his love of writing and poetry into his life.
In writing To Kill a Bunyip I had a plan. Write the book more stupid than Ocker Oscar (that was a challenge).
I now have another plan; write each book more stupid than the last book.
The single goal of A R Dent is to create original stories that entertain.
I am not writing books. I am not an author. I am now a storyteller. I have a present 'work-in-progress' to follow after To Kill a Bunyip and experimenting with other stories to find my true 'author's voice' which is there but I need to fine tune it specifically for storytelling. Short stories and Novellas are my aim to entertain through the written word.
All books/stories are related to me...... Ocker Oscar and To Kill a Bunyip were written from my experiences in my life. All stories will have a theme or plot that is connected somehow to my life. My intent is to write, using satire, in a way that people see history as a continuum that changes but remains constant. Fiction, facts, and lies.
My next book is - The People of Null (title may change). Details of the progress are posted on A R Dent Facebook page.

The Justice of Null is the core to Hollow Log Stories. My writing style has changed somewhat but satire remains as the main theme within my writings. Ocker Oscar is connected to To Kill a Bunyip though the Dawson family and the twins. These two books are present day. The Justice of Null focuses on 1857 when Terrence Null was told he was to be a Justice of the Peace. The Justice of Null is the book that Hollow Log Stories draws its characters and stories. The People of Null is in concept stage and being researched and developed. The People of Null is back in real time in the village of Null when a psychiatrist goes to Null for retirement. *Waiting for god* in a retirement village and being told to fit into society. This concept has me laughing as I write the precis and develop a story around this theme.

The Justice of Null is written circa 1857 an an alternative history of Australia before Queensland became a state. Terrence Null, as a fictional character is where it all started in regard Hollow Log Stories. In regard Null, the village of Null, where nothing happens, no such place exists except in your imagination.

To Kill a Bunyip and Ocker Oscar are about descendants of Terrence Null. The three books are written as stand alone but are interrelated through Terrence Null.

You have subscribed to alerts for A R Dent.

You have been added to A R Dent's favorite list.

You can also sign-up to receive email notifications whenever A R Dent releases a new book.