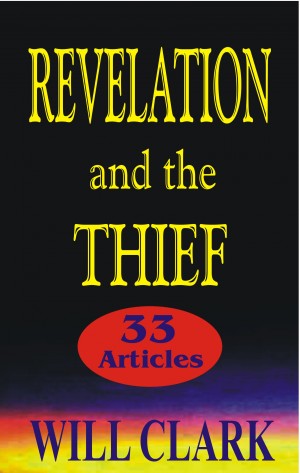 Revelation and the Thief

By Will Clark
If you want to understand what’s happening in our dangerous and confused world, today, you must read this book. It’s comprised of 33 articles the author recently posted at several sites. They were inspired by references from Revelation that explain actual current events. According to that information as interpreted by the author we are entering perilous times throughout the entire world. More
Most of the more dire events, according to Revelation, will take place in the Middle East in and around Israel. However, other parts of the Western world will suffer much tribulation when those Middle East events occur. The purpose for this book is to express those warnings.

Another action that one of belief and prudence might also consider is to prepare for that time of tribulation. The tribulation will occur when the beast, considering himself Christ, or even God, takes his seat in Jerusalem. The Bible calls this the abomination of desolation; when believers flee to the hills and wilderness when this happens. This abomination of desolation means Jerusalem will be attacked and occupied; at least for awhile. That time is revealed as three and a half years. When will this occur? There is a key clue in Daniel 9:27.

This clue explains that a covenant will be reached by seven kings for a period of seven days (years) and in the midst of the time, he shall cause the sacrifice and the oblation to cease, and for the overspreading of abominations he shall make it desolate.” A covenant will be made concerning Israel, and in the middle of the covenant the beast will set it aside and attack Israel.

How many leaders (kings) are now involved with the current Iranian nuclear arms deal? Seven: six plus Iran. How long is the schedule for that agreement? At the moment it doesn’t seem to be exact; but somewhere between five and fifteen years. So, what would happen if at the middle of that agreement, Iran were to abandon it and attack Israel? Although it might not directly involve American citizens; can you imagine the overall consequences? We would have austerity; we would have a time of tribulation: famine and thirst.

Finally, the purpose for this information is to help answer two questions regarding the Apocalypse and the tribulation. Are citizens aware of this time information? If they are aware, do they know how to sustain themselves during that three and a half years of tribulation: famine, thirst, and shortages of needed items?

Christ gives two clear and definite warnings at the end of Revelation. First is Chapter 16, verse 15: “Behold, I come as a thief. Blessed is he that watcheth, and keepeth his garments, lest he walk naked, and they see his shame.”

Will Clark’s author experiences began by writing inspection and evaluation reports in the U.S. Air Force. He is a retired Air Force officer and a Vietnam veteran, serving in Saigon from 1966 to 1967. His other overseas assignments include Misawa, Japan and Ankara, Turkey.

In 1995, he authored a book, How to Learn, as a county-wide study skills project to encourage students to improve their grades in DeSoto County, Mississippi. Education supporters printed and distributed four thousand copies. He also wrote a weekly education column for a local newspaper, The Desoto County Tribune, the following school year.

His next published book was School Bells and Broken Tales, a parody of nursery rhyme characters, also a motivation and education book for children. His other books include Shades of Retribution, a historical novel, and Simply Success, a motivation guide for students and employees.

Clark and his wife, Marie, live in Diamondhead, Mississippi, where they play golf with many friends.

Learn more about Will Clark

You have subscribed to alerts for Will Clark.

You have been added to Will Clark's favorite list.

You can also sign-up to receive email notifications whenever Will Clark releases a new book.