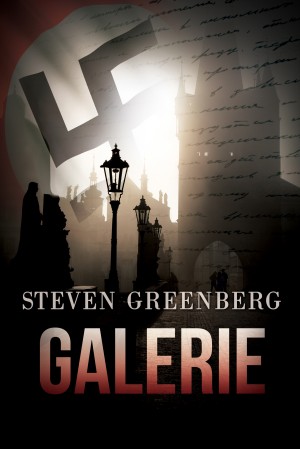 By Steven Greenberg
After Vanesa Neuman’s father dies, the closed book of what he and her grandfather were doing during the Nazi occupation of Czechoslovakia falls literally open. From Tel Aviv to the backstreets of Prague, Vanesa’s relentless quest to unravel the mystery of her father’s wartime diary reveals a seventy-year-old secret darker than she could have imagined. [Upmarket Literary, Historical, Holocaust] More
One woman’s quest for truth reveals a dark family secret long buried in Prague’s Nazi past.
~~~
WINNER: Pinnacle Book Achievement Award, Fall 2015 -- Best Books in Fiction
FINALIST: Readers' Favorite Book Awards 2016 -- Historical Fiction
~~~
"Imagine Stephen King wrote Schindler's List..." ~ Nikki
~~~
Every family holds to secrets, but some are far darker, reach deeper, and touch a rawer nerve than others.

Vanesa Neuman is the daughter of Holocaust survivors, and her childhood in the cramped intimacy of south Tel Aviv is shadowed by her parents’ unspoken wartime experiences. The past for her was a closed book… until her father passes away and that book falls literally open. Vanesa must now unravel the mystery of the diary she has received—and the strange symbol within—at all costs.

Set against the backdrop of the Nazi occupation and the Jewish Museum of Prague—Adolf Eichmann’s “Museum of an Extinct Race”—Galerie is fast-paced historical fiction in the tradition of Tatiana De Rosnay’s Sarah’s Key. From Jerusalem’s Yad V’Shem Holocaust research center, to the backstreets of Prague, and into the former “paradise ghetto” of Theresienstadt, Vanesa’s journey of understanding will reveal a darker family past than she ever imagined—a secret kept alive for over half a century.
~~~
PERFECT FOR BOOK CLUBS: A book club guide is included at the end of the story.
~~~
[Upmarket Literery, Historical, Thriller, Holocaust]
Evolved Publishing presents a thrilling work of historical fiction that examines how Holocaust horrors still resonate generations later, and how even deep wounds of betrayal can ultimately heal. [DRM-Free]
~~~
BOOKS BY STEVEN GREENBERG:
"Enfold Me"
"Galerie"
"Moon Path" (Coming 2018)
~~~
MORE GREAT BOOKS FROM EVOLVED PUBLISHING:
"The Daughter of the Sea and the Sky" by David LItwack
"Hannah's Voice" by Robb Grindstaff
"Shining Light's Saga" by Ruby Standing Deer
"Fresh News Straight from Heaven" by Gregg Sapp

Briefly….
I am a professional writer, as well as a full-time cook, cleaner, chauffeur, and work-at-home single Dad for three amazing teenagers. Born in Texas and raised in Fort Wayne, Indiana, I emigrated to Israel only months before the first Gulf War, following graduation from Indiana University in 1990. In 1996, I was drafted into the Israel Defense Forces, where I served for 12 years as a Reserves Combat Medic. Since 2002, I’ve worked as an independent marketing writer, copywriter and consultant.

More than You Asked for….
I am a writer by nature. It’s always been how I express myself best. I’ve been writing stories, letters, journals, songs, and poems since I could pick up a pencil, but it took me 20-odd years to figure out that I could get paid for it. Call me slow.

After completing my BA at Indiana University - during the course of which I also studied at The Hebrew University of Jerusalem and Haifa University - I emigrated to Israel only months before the first Gulf War, in August 1990. In 1998, I was married to the wonderful woman who changed my life for the better in so many ways, and in 2001, only a month after the 9/11 attacks, my son was born, followed by my twin daughters in 2004. In late 2017, two weeks before my 50th birthday, my wife passed away after giving cancer one hell of a fight.

You have subscribed to alerts for Steven Greenberg.

You have been added to Steven Greenberg's favorite list.

You can also sign-up to receive email notifications whenever Steven Greenberg releases a new book.