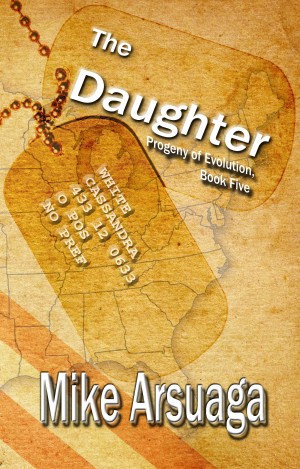 The Daughter (Book 5, Progeny of Evolution)

A dark and thought-provoking novel about addiction, redemption, and what exists on the other side of life. Cassie White lives life to the fullest knowing her life as one of the original children of the First Parents of the Other Kind isn't the easiest to survive. Vampires, lycans and a strange mix of characters pepper the journey. More
A Daughter Breaks Away
From childhood strong-willed Cassie White took her own path. As partners of the multi-national corporation, Coven International Inc., Cassie’s lycan mother Sam and vampire father Jim offer a life of unlimited wealth and luxury, but Cassie chooses a military career.

A Soldier Is Born
As a world class marksman, Cassie’s skill propels her rise to become the first in line for the most dangerous missions. She becomes obsessed with cramming the three century life expectancy of her parent’s into her much shorter lifespan.

Addiction and Decline
While the country she swore to defend falls apart, alcohol—and later narcotics—gradually undermine personal and family relationships. Only her sister Claire and her mentor General Shawcross remain steadfast. Each introduces her to rehabilitation, with varying success.

The Wounded Girl Hits Bottom and is Reborn
After The Dissolution, Cassie and her comrades discover they’ve simply traded one set of chains for another. When her brother Ed embraces the new regime, the resolve to stay clean and sober suffers a final collapse. Fifteen years later, she’s a broken derelict, estranged from friends and family, enslaved to her addictions. Then, a confluence of events, coupled with the appearance of a Double Blue Moon—a rare event of significance to lycans—provides a chance for recovery and redemption.

Can a second chance at life come once in a Blue Moon?

Raised in New Orleans, Louisiana, Mike completed careers in the United States Navy Submarine Force and the Transportation Security Administration. He lives in Orlando Florida with wife and Editor in Chief Cynthia, daughter Jennifer, granddaughter Larrna and partner in crime Thumper, a Yorkshire terrier, the inspiration for Drake Martin from The Shifter Tales series.

Mike's extensive travels in the Navy took him throughout the US, Canada, Europe, the Caribbean, and the Middle East, providing accurate and vivid settings for his stories.

His novels include The Progeny of Evolution series, a 160 year long family saga with a unique contemporary take on vampires and werewolves.
The titles in order are. 'Progeny of Evolution Series Guide' 'The Other Kind', 'The Corporation.', 'The Children', 'Life in the Time of Decline.'The Daughter'. 'The Tenth Legion', and 'Lagrange Point'. All are released or will release in 2015 from IHeart Book Publishing.
'The Daughter' and 'Life in the Time of Decline' are PG13. The other five are for over eighteen only.

Additionally, he co-wrote The Shifter Tales, "Top Dog" and the sequel "Love and Death in the Big Easy" with his wife Cynthia. Both follow the spicy adventures of a special shape shifter.

Writing under the pen name MJ Segar, Mike has two science fiction titles on the market.

'The First Servant' features a coal and steam civilization of the distant future discovering a past society hitherto believed to be a myth. Dual love stories unfold. For one, the past becomes the future.

'Jenny-Leigh 8' is a romantic action thriller. In the future, the Jenny-Leigh 8 represents the gold standard of luxury recreational androids, but in a world crisis she's becomes more than another pretty face.

You have subscribed to alerts for Mike Arsuaga.

You have been added to Mike Arsuaga's favorite list.

You can also sign-up to receive email notifications whenever Mike Arsuaga releases a new book.