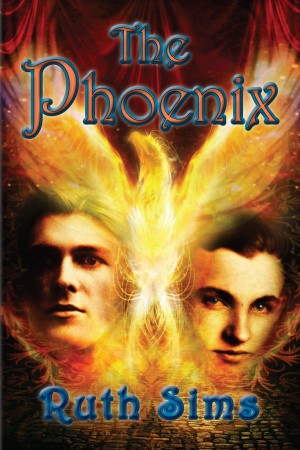 Rated 5.00/5 based on 1 review
A compelling Victorian saga of two men whose love for each other transcends time and distance—and the society that considers it an abomination. Set in the last twenty years of the 19th century, The Phoenix is a multi-layered historical novel that illuminates poverty and child abuse, as well as theatre history in America and England. More
At fourteen, Kit St. Denys brought down his abusive father with a knife. At twenty-one his theatrical genius brought down the house. At thirty, his past—and his forbidden love—nearly brought down the curtain for good.

A compelling Victorian saga of two men whose love for each other transcends time and distance—and the society that considers it an abomination. Set in the last twenty years of the 19th century, The Phoenix is a multi-layered historical novel that illuminates poverty and child abuse, theatre history in America and England, betrayal, a crisis of conscience, violence and vengeance, and the treatment of insanity at a time when such treatment was in its infant stage. Most of all it is a tale of love on many levels, from carnal to devoted friendship to sacrifice.
Available ebook formats: epub mobi pdf rtf lrf pdb txt html
First 25% Sample: epub mobi (Kindle) lrf more Online Reader
pdb
Price: $4.50 USD
Buy Add to Library Give as a Gift
How gifting works
Create Widget
Tags: romance gay queer homosexual england english historical romance theater theatre manlove actor stage gothic romance man2man

Reviews of The Phoenix by Ruth Sims

In very broad strokes, this reminded me of another neo-Victorian MM romance novel, Laura Argiri's "The God in Flight", which is one of my Favorite Ever Books Ever. "The Phoenix" never quite reached the same heights for me, but I would definitely recommend it for fans of the genre. You know who you are.

Sims did a great job capturing little details that made her various 19th Century locations come alive. She obviously did a lot of research about slum conditions in London and New York, about country life in rural England for both upper and lower classes, and about the theater and its colorful people. I also appreciated Sims' efforts to imbue female characters with as much, or nearly as much, depth as the male leads -- this is sometimes a problem in this kind of novel. I enjoyed the Over-The-Top histrionics of lead character Kit St. Denys and his mental breakdown. Did not see that coming, but it made sense given Sims' adherence to the twisty-turny soap opera format of Victorian "pulp fiction".

My only real complaint is that some characterizations were glaringly inconsistent, or at least not properly set up to act as they ultimately did. For example: A) Nicholas, the other lead character, seemed to get a personality transplant when he left London for New York. The changes could not be totally accounted for by his altered circumstances. Regardless of his marriage and career, he, like, suddenly became personable and outgoing in a way that ran contrary to his earlier depiction and psychology. B) Bronwyn, Nick's wife, started out as a super awesome kick-ass character. While on the one hand her ultimate reaction to her husband's true proclivities was completely understandable given both the specifics of their relationship and the homophobia of the time period, on the other hand I had trouble believing that she'd resort to language like "Satan is your Lord and Master", or whatever that one telegram said, given (again), her earlier depiction and psychology.

But on the whole, this book fell somewhere in between the soaring heights of my favorite similar novels, and the "riveting trash" of my less favorite. It was a page-turner, and I would read it again.

You have subscribed to alerts for Ruth Sims.

You have been added to Ruth Sims's favorite list.

You can also sign-up to receive email notifications whenever Ruth Sims releases a new book.