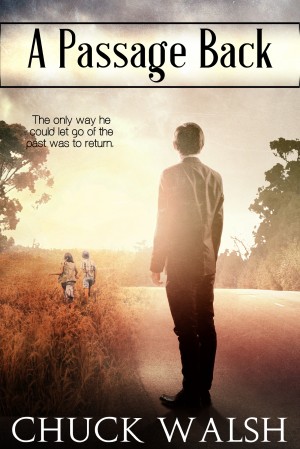 By Chuck Walsh
When a freak accident renders middle-aged Chase Watson unconscious, he awakens to his deceased mother standing over him along with his Little League teammates. And he's wearing his uniform. He's found his way back to his childhood. He'll spend as much time as he has wrestling with decisions that could affect the future...and possibly saving the life of his best friend. More
Chase Watson is frustrated with life and the fact that middle age has hit him right between the eyes. Most importantly, he’s overwhelmed by the loss of his mother. Distraught after her funeral, he drives to the Little League ball field in the neighborhood where he grew up, looking for solace. It’s the one place that symbolized youth, happiness, and care free times.

A freak accident renders him unconscious, and when he awakens, he is stunned to see his mother kneeling over him. Dazed and confused, he looks around and sees his Little League teammates standing around him. He's dressed in his Little League uniform, certain he’s in a crazy dream. Or is he?

However he got back to his childhood, Chase relishes each fresh moment he gets to spend with his mother while wrestling with choices that could affect the future. Should he prevent his best friend from attending a camping trip which ultimately ended his life? If he can help his dad overcome his battle with alcohol, what will his life look like when he returns?

The decisions aren’t easy ones, and eventually, Chase will have to return to his present time. But how much will the future change if he makes the wrong choices?
Available ebook formats: epub mobi pdf rtf lrf pdb txt html
First 20% Sample: epub mobi (Kindle) lrf more Online Reader
pdb
Price: $2.99 USD
Buy Add to Library Give as a Gift
How gifting works
Create Widget
Tags: historical fiction past lives time travel general fiction a passage back chuck walsh
About Chuck Walsh

Chuck Walsh is a graduate of the University of South Carolina, and discovered a passion for writing in 2004. Since then, he has written human-interest articles for a dozen publications. He also coauthored Faces of Freedom (featured on Sean Hannity’s book list), a book that recognizes the noble lives of U.S. soldiers who died while fighting in Iraq or Afghanistan.

His first fiction novel, Shadows on Iron Mountain, is about a killer roaming the backwoods of East Tennessee.He has also written A Month of Tomorrows, a memoir of sorts that weaves between the jungles of the Philippines and the rolling hills of Tennessee, seen through the eyes of Samuel Gable, a WWII war hero down to his final days on earth.

Chuck lives in Columbia, SC with his wife Sandy. They have three children: Jessica, Brent, and Stephanie.Chuck, a former baseball player, is an avid fiction reader, and when he’s not working on his novels, is busy reading the works of others. His favorite writer is Cormac McCarthy, whom he considers the greatest writer of our generation.

Reviews of A Passage Back by Chuck Walsh

You have subscribed to alerts for Chuck Walsh.

You have been added to Chuck Walsh's favorite list.

You can also sign-up to receive email notifications whenever Chuck Walsh releases a new book.