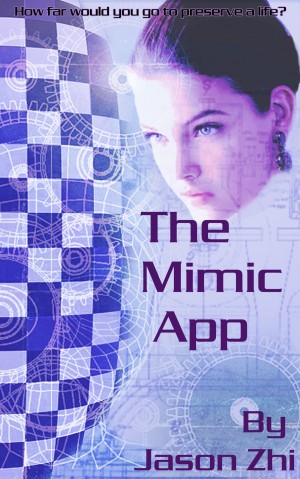 By Jason Zhi
In 2034, a former tech genius turned drug addict has invented sentient holograms called Mimics to entertain those in the South Bay Metrozone. But when his name shows up on a file of a drug lord, two detectives are sent to investigate. Their task is to secure his testimony, but doing so from an uncooperative wreck may be impossible, as the crime lord's minions are sent to terminate his life. More
The South Bay Metrozone is one of several remnants of scattered cities surviving the fallout of the third world war. The re surging popularity of social media, spear-headed briefly by a young tech genius, Adam Carson, continues to distract a war wearied populace. Carson's brain-child are the Mimics: sentient 3D holograms designed to interact with other humans and Mimics. But the controversy that unfolds, combined with the tragic loss of his wife, leaves Carson's life in shambles. Now his name has appeared on the file of a notorious drug lord, and South Bay detective Derek Koontz is assigned to investigate. His task is to secure Carson's testimony, as he may have information which can bring down the drug lord once and for all. But winning the trust of an uncooperative wreck may be impossible, and time is running out, as the crime lord's minions are sent to terminate Carson's life.

Jason Zhi is an aspiring author now in his early thirties. Originally born in the East Bay, he moved to the Central Valley with his parents, being stuck in California’s agricultural heartland for 19 years. He is a licensed Pharmacy Technician with a voracious appetite for electronic music and has tried his hand at several different things, including fire spinning, computer graphics, and stage acting, to name a few. The Mimic App is his second full length novel and the first work fully conceived by his imagination. His first novel, The Plastic Wilderness, was loosely based off his experiences in the rave scene. He hopes to continue writing, making fire poi videos and would like to get married someday.

You have subscribed to alerts for Jason Zhi.

You have been added to Jason Zhi's favorite list.

You can also sign-up to receive email notifications whenever Jason Zhi releases a new book.