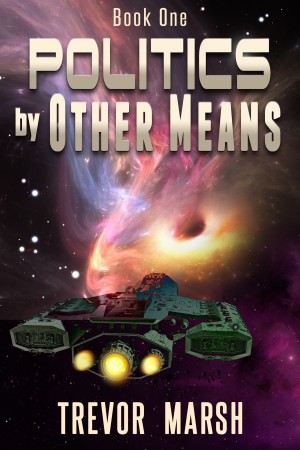 Politics by Other Means

By Trevor Marsh
A military science fiction novel with space opera elements, where humanity has just begun to establish itself amongst dozens of other alien species seeking to exploit a series of wormhole connected star systems. It will be up to two unlikely heroes, Samuel Lawrence, an Earth diplomat, and Michelle Lui, a female naval captain, to save the Earth from invasion by brutal and cunning alien menace. More
Book One of the Worlds of Words and War series.

In the year 2361, humanity has spread out across the stars thanks to the discovery of a network of wormholes connecting many of the local star systems together. Putting aside their petty differences with the formation of the United Earth Federation, humanity has suddenly found itself neighbors to dozens of different alien species. Some are quite friendly and helpful, but others pose a dangerous threat to Earth and her colonies.

Sam is a hot headed UEF diplomat, about to set out on a routine assignment in alien space. His last day on Earth before he ships out is spent in the company of Michelle, a UEF Navy destroyer captain with a serious chip on her shoulder. She too is scheduled to soon depart on a ordinary deployment to the fringe of human-controlled space near the galactic rim. They both share a common bond in their decisions to not follow traditional family career paths, but neither of them could possibly imagine that their chance encounter will have profound implications for the survival of the UEF. Alien machinations and schemes that were set into motion years ago are about to culminate in disaster for Earth and no one seems to see the threat coming.

Confronted with skeptics and enemies on all sides, it will be up to Sam and Michelle to save the people of Earth from a brutal and cunning alien menace. Mighty fleets will clash and secret diplomatic deals will be struck, but in the end it will be up to an entry-level career diplomat and a lowly destroyer captain to decide the fate of humanity...

I have a lot of science fiction influences in my life that have driven me towards writing. Besides all the science fiction I’ve read, watched, and played over the years I have also tried to incorporate my own personal experiences in my writing. I was raised in a military family myself, but I ultimately took a different path in life. My father proudly served in the United States Navy for thirty years, retiring as a captain. Growing up as a navy brat, I was constantly fascinated by military technology, history, tactics, and strategies. I was also offered the opportunity to grow up in a variety of locations around the world. The one that influenced me the most was Singapore. Seeing so many different people and cultures mixed together in one place was a very eye opening experience for me. From that point on, I knew I wanted to work in a field where I would constantly be interacting with people from all over the world. My studies eventually led me to studying international relations and political science in college, followed quickly by a legal degree with a focus on international law. My interest in geopolitics and diplomacy heavily influenced the non-military aspects of my science fiction writing.

About the Series: Worlds of Words and War

Worlds of Words and War is a science fiction series initially taking place in the year 2361 as the United Earth Federation seeks to take its place among the various alien species and empires of the galaxy.

Told from the perspective of two main characters, Samuel Lawrence a UEF diplomat and Michelle Lui a naval officer, the series explores the conflicts that arise as humanity seeks to assert itself in the galaxy. From space battles to intergalactic diplomacy to covert espionage, the Worlds of Words and War series are a combination of military science fiction blended with space opera themes.

Also in Series: Worlds of Words and War

You have subscribed to alerts for Trevor Marsh.

You have been added to Trevor Marsh's favorite list.

You can also sign-up to receive email notifications whenever Trevor Marsh releases a new book.