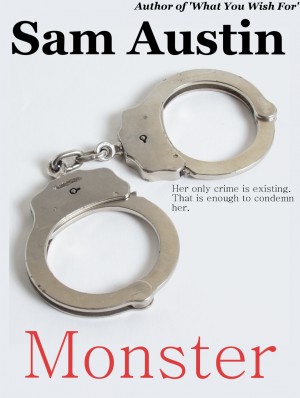 By Sam Austin
A newly turned vampire fights for humanity to see her as anything other than a monster.

Monster is a short horror story comprising of around 3.5 thousand words.

Plus free short story 'The Iron Knife' More
A newly turned vampire fights for humanity to see her as anything other than a monster.

Monster is a short horror story comprising of around 3.5 thousand words.

When a girl finds an injured man in the woods, and finds he isn't human, she and her brother have to fight for their lives against the monsters that want to kill him.

The Iron Knife is a short horror story comprising of around 7,400 words.

Sam Austin is the author of over 25 stories ranging from short horrors to the 136 thousand word fantasy epic 'Damsel Knight.' Her short story 'Second Chance' was awarded an honorable mention in the writers of the future contest. Her favourite genres to play in are fantasy, horror, and science fiction. Most of her works could be considered young adult.

Having autism and dyspraxia, she's passionate about including underrepresented characters in her stories. Her novel 'Damsel Knight' features a gender questioning teenager in a fantasy world with very strict gender roles. Roy of the 'Crystal Wolves' series occasionally battles mental health issues alongside solving paranormal crimes. And her upcoming series stars a protagonist who happens to have a severe spinal injury.

She's very fond of underdogs, so most of her stories contain characters way over their heads. The sort of guys or girls who are way too stubborn to back down even when they seem to have half of London gunning for them (Truth Seeker), or are surrounded by creatures who could kill them with a flick of the wrist (Crystal Wolves).

You have subscribed to alerts for Sam Austin.

You have been added to Sam Austin's favorite list.

You can also sign-up to receive email notifications whenever Sam Austin releases a new book.