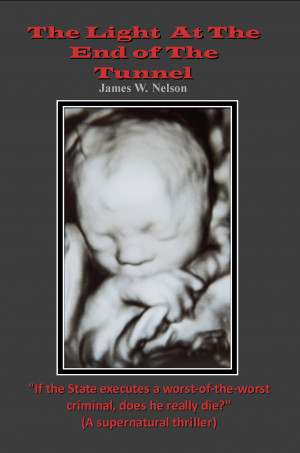 The Light at the End of the Tunnel

By James W. Nelson
Imagine remembering dying by hanging, guillotine, firing squad, electrocution, drugs, and even being beat to death. You feel the fear but there's no pain, nothing, the lights just go off. You shake your head and deny the memories are yours. You're right, they are not, not in this life. They are deja vu from your many, many, pasts. You are seeing yourself being executed, over, and over, and over. More
The prison chaplain has received a message he assumes came directly from God.
He wonders: Was it a dream? Was I awake? Was I sleepwalking? Was I dead…? AM I dead…?
An hour earlier the chaplain had awakened, and remembered his dream. He didn’t remember dreams. Never. But this one he did. The dream showed this wall locker where no locker had ever existed. But his telepathic instructions were clear, “Go to the prison basement under the chapel. Open the locker. Remove the book. Open it gently. Grasp a handful of pages and turn them.”
He had done everything but the handful of pages. He grasped them and turned them over.
Just one verse appeared in very large calligraphic lettering:
“If the state kills a worst-of-the-worst criminal, rather than allowing a natural death, that criminal, man or woman, will reincarnate as not only the same person but more evil than before. He or she will have the same memories, though not fully intact memories, but they will serve well in the new life. A worst-of-the-worst criminal MUST be allowed to die a natural death, which includes being killed by a fellow criminal.”
The execution of Les Paul must be stopped...but wasn't.
The chaplain embarks on a mission to find the reborn Les Paul and do...whatever is needed.
He is later joined by Nurse Nicole Waters, who has been sexually harassed by LP as an infant (sexually harassed by an infant? Yes!) causing her to lose her job.
While still in the womb, LP murders his twin brother by strangling him with his own umbilical cord. As LP grows he sees endless deja vu of past executions, memories he denies are his.
Cassandra is born on the same day as Les Paul. At age seven, both in foster care, their lives cross, and again at nine, when LP makes the most important decision of his many, many, violent, lives.
When Cassandra is born her mother will live long enough to name her. On the same day her father will die in Afghanistan. Cassandra starts her life alone. In foster care she will fall through crack after crack, and nobody wants to adopt this darling girl child. Lacking love, she soon discovers her crying brings her nothing. She stops crying. As she grows she does not come to love, anything, and does not come to trust…anyone.
The Light at the End of the Tunnel (about 68,000 words) (A supernatural thriller) (one theory of reincarnation) (capital punishment, horror, crime, drama, foster care) (multiple viewpoint) (if the state kills a worst-of-the-worst criminal, does he really die?)The prison chaplain, 35, recruits nurse Nicole Waters, 30, to help him find and stop the reincarnated worst-of-the-worst criminal, Les Paul, now rampaging through foster home after foster home.

You have subscribed to alerts for James W. Nelson.