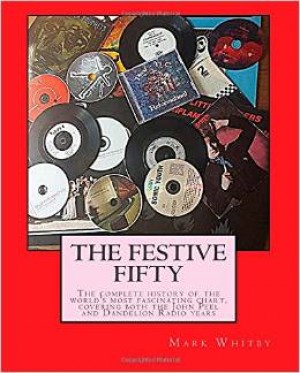 By Mark Whitby
The Festive Fifty was broadcast annually by John Peel from 1976 until his passing in 2004. Dandelion Radio have since taken responsibility for the chart, continuing to collate votes from listeners in the Peel tradition This updated version of a book that first came out in 2005 contains information from the Dandelion festive fifties as well as statistics from throughout the chart's history. More
**** Record Collector

In 1976, John Peel broadcast the very first Festive Fifty - a chart compiled from votes by his listeners - in his Radio One show. He continued to do so, roughly speaking, until his untimely death in 2004. Since then, Dandelion Radio have continued to broadcast the chart. This updated version of a book that first came out in 2005 contains information from all of those subsequent festive fifties as well as the since discovered 1977 chart and other details of interest to John Peel's dedicated fans and anyone with an interest in the rare, the challenging, the obscure and the downright good in the world of music.

Mark Whitby was born in 1965 and lives in the north-west of England with his wife and two children. He first began listening to the John Peel show in 1978 and by 1983 had realised that his infatuation with the festive fifty was at a dangerously obsessive level. Following involvement with music in a variety of ways – as a promoter of a venue, occasional DJ on community radio and some half-arsed attempts to be in a band – he joined the team running Dandelion Radio in 2007 and now runs a blog devoted to new music and a small digital record label, both called Unwashed Territories. All of the above was fired by a fascination for the John Peel show and the music he was introduced to as a consequence, so it would leave a pretty big hole in his life if it had never been there, which might go some way towards explaining why he puts himself through, and even enjoys, the process of updating and revising the information in this book every so often.

You have subscribed to alerts for Mark Whitby.

You have been added to Mark Whitby's favorite list.

You can also sign-up to receive email notifications whenever Mark Whitby releases a new book.