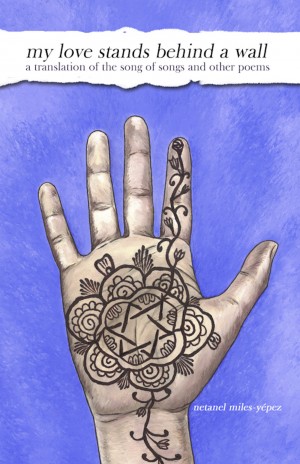 My Love Stands Behind a Wall: A Translation of the Song of Songs and Other Poems

By Netanel Miles-Yepez
“Netanel Miles-Yépez’ translations soar with the erotic ecstasy of holy desire, reminding us that knowing God isn’t only a matter of emptying out, but also a matter of merging with. His Song sings, and invites you to sing along.”
— Rabbi Rami Shapiro, author of Embracing the Divine Feminine: Song of Songs Annotated and Explained More
The Song of Songs (Shir HaShirm) is among the most beloved books of the Hebrew Bible, beloved both for the beauty of its language and for the mystical ideas it has inspired. However, many new readers may be surprised to learn that—while it is often understood as an allegory for the relationship between God (the Bridegroom) and humanity (the Bride)—it has no explicit religious content whatsoever and actually seems to celebrate erotic love. In this new translation, Netanel Miles-Yépez, attempts to emphasize the “earthy immediacy” of the original Hebrew, wishing the Song of Songs to stand on its own as “love poetry,” arguing that the mystical poetry and insights about Divine Love it has inspired actually come from an engagement with the raw imagery of human love.
Also included are translations of the mystical poetry of Juan de la Cruz, Elazar Azikri, and Shlomo Halevi Alakabetz from the Spanish and Hebrew.

Born into a Mexican-American family, in his late teens, Miles-Yépez discovered his family's hidden Jewish roots and began to explore Judaism and other religions seriously. After studying history of religions and comparative religion at Michigan State University, he moved to Boulder, Colorado to study with the innovative Hasidic master and leader in ecumenical dialogue, Rabbi Zalman Schachter-Shalomi, founder of the Jewish Renewal movement. In addition to Schachter-Shalomi, he also studied with various Sufi masters and teachers of Buddhism, and counts Father Thomas Keating, Trappist monk and founder of the Centering Prayer movement, as an important influence. In 2004, he and Schachter-Shalomi co-founded the Sufi-Hasidic, Inayati-Maimuni Order, fusing the Sufi and Hasidic principles of spirituality and practice espoused by Rabbi Avraham Maimuni in 13th-century Egypt with the teachings of the Ba’al Shem Tov and Hazrat Inayat Khan. Currently, he teaches in the Department of Religious Studies at Naropa University in Boulder, Colorado.

As a writer on religious subjects, he is known for his critically acclaimed commentaries on Hasidic spirituality (written with Rabbi Zalman Schachter-Shalomi), A Heart Afire: Stories and Teachings of the Early Hasidic Masters (2009) and A Hidden Light: Stories and Teachings of Early HaBaD and Bratzlav Hasidism (2011); and for the ecumenical works he has edited, The Common Heart: An Experience of Interreligious Dialogue (2006) and Meditations for InterSpiritual Practice (2011).

As an artist, Miles-Yépez is mostly known for his vibrant paintings, influenced by traditional religious imagery and his Mexican-American heritage. His work in general represents a lifelong fascination with religious iconography, myth and symbol, image and archetype, cultural impressions and his own ancestry. Most of his work is concerned with the acculturation and use of traditional symbols and iconic forms in a new multi-cultural paradigm. 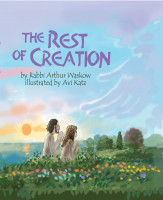 You have subscribed to alerts for Netanel Miles-Yepez.

You have been added to Netanel Miles-Yepez's favorite list.

You can also sign-up to receive email notifications whenever Netanel Miles-Yepez releases a new book.