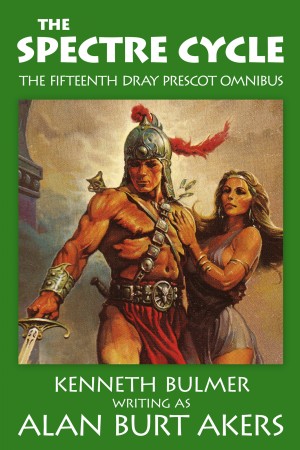 By Alan Burt Akers
The Dray Prescot Saga, omnibus edition, containing books 50 to 51 in the epic series. More
Dray Prescot has been chosen by the Star Lords to be the so-called Emperor of All Paz. Together, the countries of Paz must resist the deadly Shanks who raid from over the curve of the world. Delia and Dray Prescot have abdicated the throne of Vallia and now seek to make the dream of a united Paz come true.

Shadows over Kregen
Whether Prescot is battling slavers and freeing slaves with the Kroveres of Iztar, or fighting Fish-heads in the land of the Shanks, he is certain to be thrown into more headlong adventures under the streaming mingled lights of the Suns of Scorpio.

Murder on Kregen
A new page turns in the unruly life of Dray Prescot, and all his strengths and inner resources will be required to confront fresh problems and perils. Join Dray Prescot as he rides south from the port city of Zandikar on the inner sea of the continent of Turismond, the Eye of the World, with his blade comrade Seg Segutorio and the Princesses Velia and Didi of Vallia. Of course, as is the nature of Kregen, they face unexpected peril...

Turmoil on Kregen
The undead monster called the Spectre has been destroyed. Didi herself lies seriously injured in Zandikar in the Eye of the World, lovingly tended by her cousin, Princess Velia. Ulana Farlan, the governor of Didi's province of Urn Vennar, has been removed from office. Now the rogue and schemer Nath Swantram, Nath the Clis, rules. But the Spectre, dead and animate, is about to terrorize Gafarden again as Tralgan Vorner, the wronged Elten of Culvensax, seeks vengeance on those who betrayed him. Within Vorner the Spectre lives.

Alan Burt Akers is a pen name of the prolific British author Kenneth Bulmer, who died in December 2005 aged eighty-four.

Bulmer was also active in science fiction fandom, and in the 1970s he edited nine issues of the New Writings in Science Fiction anthology series in succession to John Carnell, who originated the series.

You have subscribed to alerts for Alan Burt Akers.

You have been added to Alan Burt Akers's favorite list.

You can also sign-up to receive email notifications whenever Alan Burt Akers releases a new book.