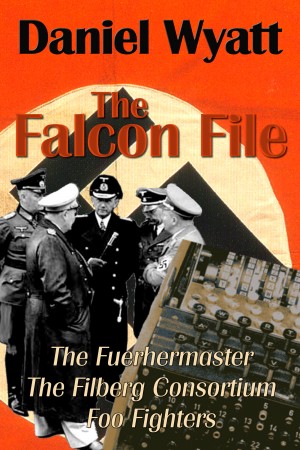 The Fuehrermaster
Spring, 1941. Britain's Prime Minister Winston Churchill is on the verge of being overthrown by an English lobby group of Nazi appeasers who plan to sign a secret pact with Nazi Fuehrer Adolf Hitler to end the war in Europe. Hitler gets wind of the overthrow. He feels that the British group are ready to cut a deal on his terms, and that only one man--his deputy Rudolf Hess--could pull it off for the Fatherland. Through secret channels, Gestapo chief Heinrich Himmler--who has his own ambitions to be Fuehrer--finds out what Hess and Hitler are attempting.
Across the channel, Churchill's group is ready. Young hot-shot American intelligence agent, Wesley Hollinger, on loan to the British Secret Service, uncovers Heinrich Himmler's plan to eliminate Hess and plant an imposter...

The Filberg Consortium
It is late 1941. America has yet to enter the war. A German agent secretly lands in Great Britain with orders from Gestapo chief Heinrich Himmler and financed by I.S. Filberg, the huge German industrial cartel, to identify and kill the prisoner called Rudolf Hess.
Meanwhile, in London, American agent Wesley Hollinger discovers a crucial missing section to the first Hess peace papers found near the crash site in Scotland. The paperwork itemizes sensitive Wall Street loans to Nazi war factories -- deals arranged by I.S. Filberg.
Hollinger doesn't know who to turn to -- his adopted England or his home country. And thousands of miles away in the Pacific a heavily-armed Japanese Task Force is heading towards Pearl Harbor...

Foo Fighters
It is early 1945 and Germany is losing the war. The Russians, the Americans, and the British are closing in on Berlin and Hitler's bunker.
In this startling end-of-the-war tale two high-ranking Nazi officials, Martin Bormann and Hermann Goering, are collaborating with Wesley Hollinger and the American OSS for free passage out of Germany in exchange for blueprints to advanced German technology -- jet fighters, rockets, missiles and early flying saucers, nicknamed "Foo Fighters". The Americans are desperate to keep the Foo Fighter blueprints from reaching Russian and British hands.
Wesley Hollinger of the OSS soon realizes what World War Two is really all about -- power, money, and politics.

Price: $9.99
$6.99 USD
Buy with coupon Use the code AGB30 at checkout for 30% off during our site-wide promotion!
(Offer good through May 31, 2020 )
Have a better coupon?
Add to cart, then apply your coupon
Add to Library Give as a Gift
How gifting works
Create Widget
Tags: espionage war hitler ww2 spy germany mi6 churchill oss rudolf hess
About Daniel Wyatt

You have subscribed to alerts for Daniel Wyatt.