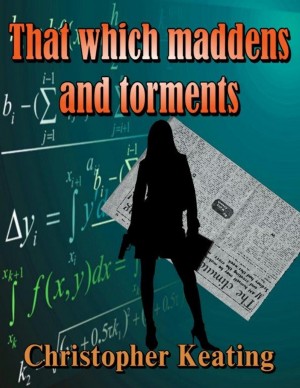 That Which Maddens and Torments

Jo Black was the key to a puzzle. The only problem was, no one bothered to tell her. As a result, she found herself in a crossfire between people who wanted her dead and those who needed her alive. The people using her were ruthless. But there was something they didn’t understand - so was she. She was going to have to see this fight through to the end. And, that wasn’t necessarily a bad thing. More
With the encouragement of her uncle, a retired professor of geophysics, Josephine Black, a recent college graduate, begins reporting on the issue of climate change for a major New York City newspaper. She quickly discovers that she has a passion for the subject and a talent for investigative journalism.

It’s not long before Jo’s hard-hitting articles are being noticed. However, leaders within the powerful fossil fuel industry don’t like what they are reading. They believe that the information in Jo’s articles could threaten their profits eventually, and they are also concerned that Jo will uncover a scientific report written by a friend of her uncle’s that proves the truth about global warming. The industry’s leaders are ruthless and are willing to stop at nothing to silence Jo and protect their profits.

Soon, Jo finds herself caught up in a very dangerous high stakes “cat and mouse game” related to the climate change debate. A game that combines politics and policy brokering at the highest levels of government with criminality. However, Jo is determined to outwit her ruthless enemies no matter what it takes.

Full of twists and turns, That Which Maddens and Torments is an entertaining, page-turning read. However, it also provides readers with insights into the debate surrounding the issue of global warming and helps to explain the motivation behind many of the global warming skeptics or deniers we read about or see on TV.

Chris Keating had his first story published when he was just seven years old and in second grade. He has been writing both fiction and nonfiction ever since.

He wrote his first book, Dialogues on 2012: Why the World Will Not End, while he was a professor of physics at the U.S Naval Academy. He was inspired to write it because of continually being questioned on all walks of life about the myth the world was going to end on December 21, 2012 according to the Mayan calendar.

After the world didn’t end, Chris decided to tackle the controversial topic of climate change by writing Undeniable! Dialogues on Global Warming, which was published in 2014. He also began the online Global Warming Skeptic Challenge, offering $10,000 to the first person who could prove the fallacy of global warming. His challenge quickly went viral and Chris spent his entire summer that year responding to submissions. He later published a compilation of the submissions and his responses, which can be purchased at Amazon.com or downloaded as a free PDF at ChrisKeatingAuthor.com. Chris also writes the blog, Dialogues on Global Warming, which is devoted to climate change issues.

Chris most recent book is the thriller, That Which Maddens and Torments. It pits an ambitious, hard-hitting young newspaper journalist writing about global warming against villainous denier lobbyists in Washington, D.C., who are working for the fossil fuel industry. At the behest of their clients, the lobbyists will stop at nothing to protect the industry’s profits and to ensure that a scientific study proving the truth of global warming does not become public. However, they didn't realize the journalist could be just as ruthless as they.

After successful careers as an Intelligence Officer in the U.S. Navy and the Navy Reserve and then as a professor of physics, Chris now lives in the Texas Hill Country, where he continues to focus on climate change research and to write.

You have subscribed to alerts for Christopher Keating.

You have been added to Christopher Keating's favorite list.

You can also sign-up to receive email notifications whenever Christopher Keating releases a new book.