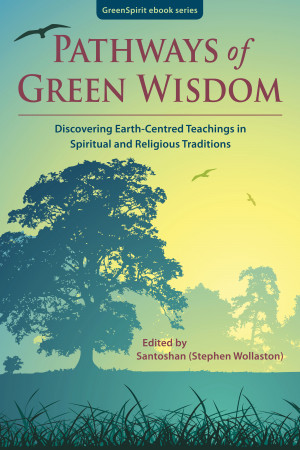 By Santoshan (Stephen Wollaston)
This informative ebook brings together numerous insightful articles by various respected authors. It will make an essential addition to any eco-conscious reader’s library on green spirituality and religion. Contributors share their understanding of Earth centred teachings and enriching dimensions of deep green wisdom to engage with in daily life. More
‘Pathways of Green Wisdom’ covers teachings and practices that promote honouring and compassionately caring for Nature. It brings together numerous reflective and informative pieces by contributors to GreenSpirit magazine spanning a period of 11 years, along with especially written new material.

Contributors include progressive and insightful writers from scientific, educationist and eco-activist backgrounds. Each of them writes skilfully while displaying a wealth of knowledge and deep understanding of green wisdom found within a specific tradition. Each offers an enriching well for eco-spiritual readers to draw some nourishment and appreciate numerous Earth-centred dimensions of a particular path.

Stephen Wollaston is a OneSpirit Interfaith Foundation minister and was given the name Santoshan (contentment) by an English swami. He holds a degree in religious studies and a postgraduate certificate in religious education from King’s College London. He has also studied typographic design and transpersonal psychology and is currently training on a BACP accredited psychosynthesis course. In the late 70s he was the principal bass guitarist of one of London’s first punk rock bands, The Wasps. He has taught world religions and other humanities subjects, English language and academic writing at various educational establishments in the UK and at a medical university in the Middle East.

He has been a trustee of the UK charity GreenSpirit for many years, a member of its editorial and publications committee, the main typographic designer of GreenSpirit magazine and the GreenSpirit Book Series, and edited and written titles in the series. He is an author, coauthor and editor of more than twelve books, including 'Spirituality Unveiled: Awakening to Creative Life' (Earth Books paperback and mid-price Smashwords eBook), 'River of Green Wisdom: Exploring Christian and Yogic Earth Centred Spirituality' (low-cost GreenSpirit paperback and Smashwords eBook), and 'Realms of Wondrous Gifts: Psychic, Mediumistic and Miraculous Powers in the Great Mystical and Wisdom Traditions' (revised low-cost paperback and Smashwords eBook).

He was also a close friend of the late renowned UK medium and former Benedictine monk Glyn Edwards for 26 years, coauthored two books with him, edited two anthologies of his teachings, and compiled a tribute book about him.

You have subscribed to alerts for Santoshan (Stephen Wollaston).

You have been added to Santoshan (Stephen Wollaston)'s favorite list.

You can also sign-up to receive email notifications whenever Santoshan (Stephen Wollaston) releases a new book.