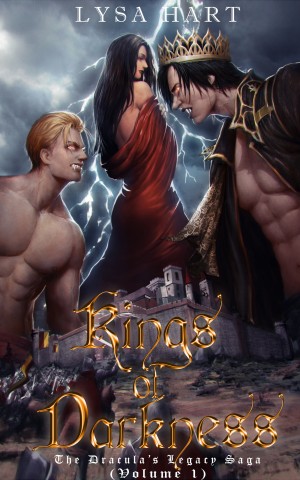 Dracula has been gone for two centuries; he had two sons, Valerian and Argus, who lived in the city of Khandar long after he disappeared. They were separated from each other, but managed to build an empire until one day their interests collided and started a war for territory bringing them together in an epic struggle for dominance, but it’s a sultry slave girl who will determine their destiny. More
Kings of Darkness - The Dracula's Legacy Saga.
Volume 1 in a series of 3 books
The Greatest Thriller Vampire Novel!

Are you looking for a thrilling vampire book full of twists and turns? If you are, look no further; download my latest novel "Kings of Darkness" today because when you start reading it, I promise you, Kings of Darkness will keep you hooked to the very last word.

On the eastern edge of a dark continent, lies Khandar, a land of mystic mountains and strange folklores. It is said evil escaped the Hasnu Mountains, taking on the form of a man...Dracula. Centuries passed from one to the next, as the embodied figure grew in power and ruthlessness. Young, beautiful women vanished, taken in their prime to satisfy the beast, but Dracula’s thirst for lust and blood knew no bounds.

He eventually ruled the land, controlling everyone and everything. Over time, his carnal nature spawned an army of vampires, killing and conquering vast, human lands. Yet, there was something to the north of his darkened kingdom that halted his exploits and scared him into stagnation.

It was during this time of lessened hostilities that the evil Lord begat two sons, Valerian and Argus. They were as beautiful and brutally merciless as their father...if not more so. However, all creatures have fallibilities, even those cursed with a thirst for fresh blood, and eventually Dracula and his filth were driven and killed, marking 100 years of peace...but the brothers survived, one escaping to the east and the other to the west.

Power and an unquenchable appetite for fresh, virgin blood bring the siblings together in an epic struggle for dominance, but it is a sultry slave girl who will determine their destiny. Hanine holds a power over Valerian that defies understanding, but she belongs to another, Don, a mortal. The woman is voluptuous, spellbinding, and defiantly regal: holding the vampire king in a web of unnatural love, while trying to remain true to her chosen mate.

Egos will clash, vampires will devour, love will endure...but everything will change. Hanine unwittingly holds the key to the fate of her people and two vampire nations – journey to the depths of human emotion, and discover the essence of Dracula’s depravity in the pages of Kings of Darkness - Dracula’s Legacy Saga, volume 1.

Take action today and download this great romance paranormal book with lots of action and suspense! You don't want to miss this great opportunity!!!

Lysa Hart is actually the pen name I've decided to compose paranormal fiction books not just to get a fan following or to get a famous tag, but also because I have a passion for writing and all. I like to read paranormal and romantic books and due to my love for paranormal books I began writing. My books are typically short, however loaded with astonishments and suspense which readers like the most about my writings. I like writing short books on the grounds as I always come up with something new and different so I never get my readers bored.

I belong to a small family consisting of my Dad, my Mom, and a brother older than me who has blessed me with the only nephew I have and whom I like very much. I have been sport active since my teenager years, working out is my other passion and now a habit that I can't live without it.

I've been motivated by legends of the class like R.L Stine, and current powerhouses like JR Ward and Stephanie Meyer. I framed my own particular one of a kind style of turning stories that is immediately, enamoring and alarming. A dared evil on a basic level, I invest some of my free energy sharing in real life sports, yet some would say my other passion is just as exciting.

I trust you appreciate perusing my books and rating them. My objectives are always to get my readers interested.

I hope you enjoy reading my books!

About the Series: Kings of Darkness - The Dracula's Legacy Saga

Valerian and Argus are Kings of Darkness. They are uniquely acquainted with lust, power, and death. The brothers were born to rule and reign in blood and horror... but the love of a single woman may change mankind’s future and seal her twisted fate forever. Descend into the depths of depravity and taste life’s bitter curse for those who dare learn the secret of Dracula’s legacy. It is a tale you will not soon forget.

Also in Series: Kings of Darkness - The Dracula's Legacy Saga

You have subscribed to alerts for Lysa Hart.

You have been added to Lysa Hart's favorite list.

You can also sign-up to receive email notifications whenever Lysa Hart releases a new book.