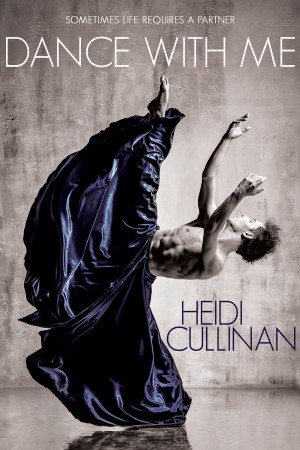 By Heidi Cullinan
Rated 3.00/5 based on 1 review
A football injury has stopped Ed Maurer's semi-pro career in its tracks, but when he finds himself teaching tango with prickly, wounded former professional dancer Laurie Parker, he finds himself caught up in a whole new kind of game, one with his heart at the center of the stakes. More
Sometimes life requires a partner.

Ed Maurer has bounced back, more or less, from the neck injury that permanently benched his semipro football career. He hates his soul-killing office job, but he loves volunteering at a local community center. The only fly in his ointment is the dance instructor, Laurie Parker, who can’t seem to stay out of his way.

Laurie was once one of the most celebrated ballet dancers in the world, but now he volunteers at Halcyon Center to avoid his society mother’s machinations. It would be a perfect escape, except for the oaf of a football player cutting him glares from across the room.

When Laurie has a ballroom dancing emergency and Ed stands in as his partner, their perceptions of each other turn upside down. Dancing leads to friendship, being friends leads to becoming lovers, but most important of all, their partnership shows them how to heal the pain of their pasts. Because with every turn across the floor, Ed and Laurie realize the only escape from their personal demons is to keep dancing—together.

Heidi Cullinan has always loved a good love story, provided it has a happy ending. She enjoys writing across many genres but loves above all to write happy, romantic endings for LGBT characters because there just aren't enough of those stories out there. When Heidi isn't writing, she enjoys cooking, reading, knitting, listening to music, and watching television with her husband and teenaged daughter. Heidi is a vocal advocate for LGBT rights and is proud to be from the first Midwestern state with full marriage equality. Find out more about Heidi at www.heidicullinan.com.

Reviews of Dance With Me by Heidi Cullinan

I found this to be enjoyable, but a fairly standard M/M romance novel. It was trope heavy and some of the characterization cliched. Of course, I like a lot of M/M tropes, that's part of why I read it. But I also like a book to go beyond them too and I'm not sure how much Dance With Me managed that.

I liked Laurie, Ed, and their stereotypically unexpected pairing. (Though it's that same real-life stereotypical lack of expectation that makes it so very expected in an M/M romance book.) I liked Oliver and Christopher as side characters (really just Oliver, as Christopher is fairly characterless, but they're presented as a pair). However, I really felt that Laurie's wealthy, dismissive, pushy parents and Ed's working-class , accepting, emotive, loving family was painfully cliched. I liked that they got their happy ending, but the proposal felt like a pat, expected conclusion.

Really, I could go on like this. Cullinan providing something nice in the book, but then having to note its common, overuse in MM romance. It made the whole book feel a bit formulaic, no matter that I enjoyed it.

Lastly, I have to address the hot tub scene, as many other reviewers have. I too thought it felt out of place, not because I'm a prude, but because Laurie expressed several times that he wasn't into public displays of sex and, even in the scene itself, he's scared and nervous. Yes, I see that Cullinan was trying to use this to show Laurie accepting himself as a gay man and his sexuality. However, it didn't fit him as a character, gay or otherwise. It felt like a poorly done bit of kink thrown in there at the end for no reason but spice.

Like every book I've read by Cullinan, the writing and editing were fine and I'll almost assuredly read another one.

You have subscribed to alerts for Heidi Cullinan.

You have been added to Heidi Cullinan's favorite list.

You can also sign-up to receive email notifications whenever Heidi Cullinan releases a new book.