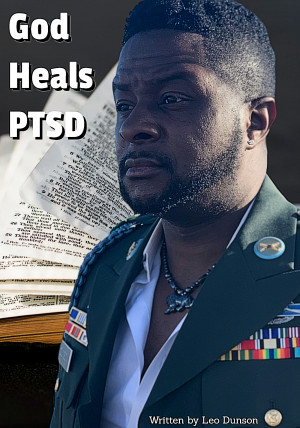 By Leo Dunson
Is it possible for God to Heal PTSD? Former U.S. Army Sergeant Leo Dunson seems to think so. In this book he breaks down PTSD as a disease needing chemotherapy and with God being that chemotherapy. Leo believes that with constant regular treatment along with following God through the steps in this book. Anyone can be Healed of anything including PTSD.

Leo Dunson is a Preacher, Activist, and decorated Iraq War Veteran. Leo graduated from the University of Nevada Las Vegas, receiving a B.A. in Political Science. Mr. Dunson served in the United States Army, Infantry, obtaining the rank of Sergeant and deploying to Iraq with the 172nd Stryker Brigade. Leo Dunson has appeared on several news media outlets to include NRATV, CNN, Fox News, Huff Post, BreitBart, the Associated Press and many other major news media outlets.

You have subscribed to alerts for Leo Dunson.

You have been added to Leo Dunson's favorite list.

You can also sign-up to receive email notifications whenever Leo Dunson releases a new book.