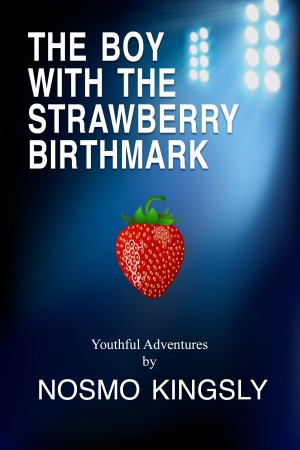 The Boy With The Strawberry Birthmark

By Nosmo Kingsly
This is a fictionalized story of youthful adventures—based on reality. More
This is a fictionalized story of youthful adventures—based on reality during life-threatening WW2 chaos, schooling, bullying, self-defence, animal birthing/care, business development and real estate sales in England; travels to and in Africa as a shipping company neophyte, and ‘wannabe’ mountaineer—all while conflicted by well meaning but often incompatible guidance from family, friends, mentors, peers, etc. Who to believe and trust?
Characters depicted are based on real people, but names have been modified to safeguard their personal information and privacy.
Adventure for many is the spice of life and, to others; life without it might seem humdrum or unchallenging. At the other extreme, it can become terrifying to the point of life threatening. Without doubt, to many—the greatest life adventure is learning about and thriving in this incredible universe we all share.
Download: epub mobi (Kindle) pdf more Online Reader
rtf lrf pdb
Price: Free! USD
Add to Library
Create Widget
Tags: bullying adventures real estate sales south africa self defense schooling animal care astral projectiontravel notes on judaism seaboard freighting
About Nosmo Kingsly

You have subscribed to alerts for Nosmo Kingsly.

You can also sign-up to receive email notifications whenever Nosmo Kingsly releases a new book.