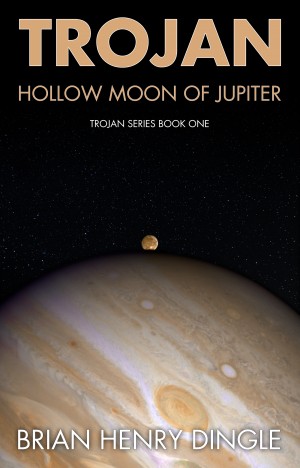 Rated 3.50/5 based on 2 reviews
Trojan, a hollow Moon built by the Nefra as a beachhead to attack Earth, has been inhabited by half a million Earthsiders, to prevent just such a threat.
Suddenly street people in Trojan start dying. Local police take interest when Richard Fletcher, failed father, relapsed priest, drug addict, and brother of Trojan’s major drug lord, is in the weightless, world famous Ortho Burn unit More
In 2025, a new moon of Jupiter suddenly appeared. Circling in the same orbit as Ganymede, Jupiter’s formerly largest moon, the hollow metal structure quickly attracted attention. Made of rare alloy and spinning like a top, it was explored and claimed under United Nations Space Administration. Military and government quickly surmised that the purpose was as a beachhead for an alien force, but when they went there, all they found were two Nefra convicts inside.
Frightened into world wide unification, Earth decided to populate the moon, Trojan, for mining riches, for new clean space, for new gravitation technology the Nefra brought with them, and to prevent inhabitation by a foreign alien, as yet largely unknown power.
Over the next forty years, the new pioneers, the Trojans, developed a society of their own while waiting for the invasion that never came. Behind the scenes diplomatic efforts slowly developed a passing peace between Earth and Nefra, leading to re-contact and second wave of Nefra immigrants in 2063. Ultimately, a small population of ‘aliens’ integrated with the ‘Earthsiders’ who came up to become ‘Trojans’ and seek their own new identity.
From the very beginning, Nefra looked exactly like Earthsiders, with a few significant physical and physiologic differences, and the slow discovery that they represent a diaspora of humans became apparent, if not believed by the entire general public.
Settled into this dreary existence, street people and Egrit drug addicts started dropping dead in the streets of Charity. Considered a blessing on the most part because of the long ‘rap’ sheets, police investigations were perfunctory until Richard ‘Dicky’ Theodore Fletcher got caught in this set of serial killings and ended up, barely alive, in Trojan’s Ortho Burn Unit. Failed father, ex-priest, and Egrit addicted derelict himself, he attracted the attention of Trojan Police Department largely because he was the brother of Thomas Reginald Fletcher, the gangland drug king pin of Trojan.
His doctor, Donald Garth, son of one of the first astronauts to explore Trojan, and the lead investigator, a Nefra, Detective Inspector Simeran, join forces to care for Dicky, keep him alive and safe, and guide back to the person he once was, while helping them take down the huge Fletcher gang drug trade, and solve the problem of Egrit-nits dying on the streets of Trojan’s two cities.
Dicky’s conversion and rehabilitation, physically and spiritually, leads to a surprising turn of events that reaches to the upper levels of Trojan military administration, including the shadowy but ubiquitous UNSA Global Security forces.

Dr. Dingle is an Internist and Hematologist, working in Medical Oncology at the London Health Science Program of Schulich School of Medicine and Dentistry, Western University, London, Ontario, Canada. He has practiced this specialized discipline of Medicine for over forty years. He is still engaged in clinical medicine, teaching of undergraduates and post-graduates, research and in the past, administration. His past administrative responsibilities have included nine years on the College of Physicians and Surgeons of Ontario, several years promoting and developing the Grand River Regional Cancer Centre in Kitchener, Ontario, and Chief of Oncology and Senior Medical Director of the Oncology Department at the London Health Sciences Centre.
Brian Dingle holds a third degree (Sandan) black belt in Shidokan karate, and a fourth degree (Yondan) in Chito-Ryu karate, and is one of the founding directors of the Grand River Karate which continues (alas, without him) to this day. His undergraduate degree was in Physics and Mathematics at University of Toronto, and he obtained a Masters degree in Pharmacology while completing his Medical Degree at the same university.
Dingle lives with his wife, Vikki, in London, Ontario, and has three children and two grandchildren.
Dr. Dingle is the author of two books in his Trojan Series, and has published one (posthumously) of his father-in-law's, Dr. Harold Warwick.

About the Series: TROJAN

In a near future world created from the reuniting of two disparate groups of Humans, worlds and years apart, the Earthsiders and Nefra come together in a hollow metallic moon called TROJAN.

Nefra (a Yenna word for humans with tails) have some advantages over typical Earthsiders, with large muscular tails, pheromone scenting, and greater life-span. But their world is collapsing under militaristic government and man-made pollution, and so they seek re-union with their origins.

Trojan is large, dense, and hollow. Nefra have developed gravitational technology that far exceeds Earth knowledge, and hints at inter-galactic travel, and perhaps even time travel, to which Trojan, a space-time flat environment, is the key.

Tension between Nefra and Earthsiders ultimately produces Trojans, the gritty people who live inside the hollow moon: the outpost of Earth, the beachhead of Nefra, the world famous weightless hospital serving the most severely injured from both sides, and the promise of greater joint efforts still to come.

Join us in exploring this fascinating new world and its people.

Reviews of Trojan: Hollow Moon of Jupiter by Brian Henry

Trojan: Hollow Moon of Jupiter follows chronologically from Trojan: Nefra Contact. Humanity has colonised Trojan to ensure that the Nefra can never use it as a beach head to invade Earth. Despite the social unease, and the myriad incorrect theories flying about the Nefra, there are a number of Nefra living among the colonists, mostly working in the armed forces and law enforcement. However, something is mysteriously killing street people, a fact that doesn’t attract much attention until one of the victims doesn’t end up dead – and turns out to be the brother of one of Trojan’s most notorious crime bosses.

Brian Dingle’s characters form the strong point of this book, from the seminarian-turned-crook to the sunny-natured Nefra policewoman who helps to break the string of murders, and the world-building is detailed and convincing. The main points of philosophy are told, rather than shown, which is a shame as they’re good points, but the overall story will gain the reader’s sympathy despite that, with good action scenes and dialogue. The science behind Trojan is also refreshingly well integrated into the plot, placing the story firmly as a science-fiction crime thriller, rather than a crime thriller where the characters happen to have spaceships rather than taxis. I’d definitely recommend this to anyone who enjoys sci-fi.

An entertaining read and I enjoyed the science. The crime scenes were less interesting to me mostly because of my own history of training in Detroit inner city hospitals. This is not a book for the squeamish but an enjoyable read if you enjoy science. The characters are well described and at times maybe more description than needed. I kept trying to guess the next scene but was not successful, which made the read more interesting.

You have subscribed to alerts for Brian Henry.

You have been added to Brian Henry's favorite list.

You can also sign-up to receive email notifications whenever Brian Henry releases a new book.