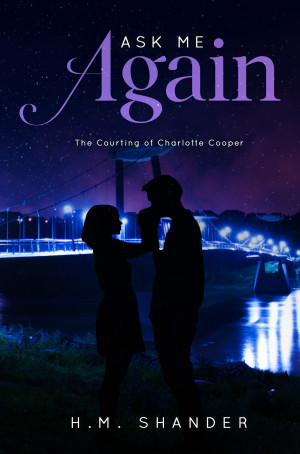 By H.M. Shander
Rated 4.67/5 based on 3 reviews
Would you jump at a second chance for happiness?

When Charlotte's true love comes back into her life as a Project Manager, she finds herself fighting against the feelings he brings out in her.
He represents safety, passion and around him, she can be herself.
When her life falls apart, she has a choice to make once again. And this time, her life depends on it. More
Would you jump for a second chance at love?

Unhappily married, Charlotte fears the man who shares her bed. When a water line bursts in their kitchen, the unimaginable occurs and the one guy who still owns her heart comes flooding back into her life as the Project Manager.

It’s not just her home he’ll repair; he’s going to fix his past mistakes. With her.

One moment after another, they spend time reminiscing, laughing and fighting their intoxicating chemistry as if thirteen years hadn’t passed between them. But her husband—a wonderful, generous man to the outside world, and the nightmare she’ll never wake from—forbids further contact. He’s worked too hard to mend the original damage, and he’ll fight to the death to stop her.

There will be no leaving.

There will be no happily ever after.

Not with him. Not with anyone.

Does she accept where her past choices have brought her, or does she risk her life for a chance at a new beginning?

USA TODAY bestselling author H.M. Shander is a star-gazing, romantic at heart who once attended Space Camp and wanted to pilot the space shuttle, and not just any STS – specifically Columbia. However, the only shuttle she operates in her real world is the #momtaxi; a reliable SUV that transports her two kids to school and various sporting events. When she’s not commandeering Betsy, you can find the elementary school librarian surrounded by classes of children as she reads the best storybooks in multiple voices. After she’s tucked her endearing kids into bed and kissed her trophy husband goodnight, she moonlights as a contemporary romance novelist; the writer of sassy heroines and sweet, swoon-worthy heroes who find love in the darkest of places.

If you want to know when her next heart-filled journey is coming out, you can follow her on Twitter(@HM_Shander), Facebook (hmshander), or check out her website at www.hmshander.com.

About the Series: The Courting of Charlotte Cooper

Also in Series: The Courting of Charlotte Cooper

Not sure how many times i said this but my feelings will still remain the same.....again not a love triangle fan. I just can't hate one character because the other was in the picture too.....However sometimes authors are so good at making you not like one or the other character, and in this case i was pleased with the outcome.
I try not to follow the reading trend these days, it feels like i'm reading same story over and over again "Ask Me Again" was different. This author did her homework on this one. The characters; it felt as if she brought them to life, the platform was strong and story so authentic. Also enjoyed the authors style so easy on us readers, it felt real!
I enjoyed this read and i would continue and read more of this author!

I also would like to say...Thank you to H.M. for the free copy in return for an honest review!

I was lucky enough to receive a copy of HM Shander’s Ask Me Again, a follow up to her previous novel Run Away Charlotte. She told me that I didn’t need to have read the first book to follow along, but now that I’ve finished Ask Me Again I definitely want to pick up Run Away Charlotte to see how it all began.

From the very beginning we got hints of how bad Charlotte’s life was with her husband, but it seemed like it could all be put down to a couple who was falling out of love with one another. Once we got a glimpse of who Jack really was, I was hoping that she’d leave him and every time she talked herself into staying I was frustrated.

Shander really portrays the character of a woman who is a victim of domestic violence, both verbal and physical, honestly. While it made the story hard to read at times it felt very real and I was frightened for Charlotte on a lot of occasions. Everything seemed to happen to the poor woman, from a flood in her kitchen to the death of someone very dear to her, and I didn’t blame her one bit for trying to escape into the past with Andrew.

Andrew, the man she never really fell out of love with, was everything Jack wasn’t and he was a breath of fresh air. I loved how relaxed Charlotte was able to be when she was with him, and it made her going back to her husband all the sadder. When things came to a head later, I honestly wasn’t sure who she would choose and for that I give Shander a huge thumbs-up.

All in all, I really enjoyed Ask Me Again. The characters were flawed but likeable (except Jack, who was just the worst), the story was paced really well, and when I was able to let out the breath I’d been holding for two chapters the ending was satisfying. Charlotte really grew as a person and I was proud of her. Definitely recommend this book to fans of women’s fiction and romance.

I received this book from the author in exchange for an honest review. This was the first book I read by Ms. Shander and it was a great read. Although this was not the first book of the series, based how Ms. Shander intertwined information about Charlotte into the book so you had an idea of how things transpired. Charlotte gave up her heart to someone many years ago and her husband knew it. Now that person is back into her life by happenstance. Jack, Charlotte’s husband, does not like that fact. Between their story, Gabe and Miranda (Brother- and sister-in-law), her best friend Joe and his wife, all intertwining, it was a great read. I hope there is going to be more because I really want to know what is going to happen to Gabe, Miranda, and Chelsea. Thanks for the great read Ms. Shander!

You have subscribed to alerts for H.M. Shander.

You have been added to H.M. Shander's favorite list.

You can also sign-up to receive email notifications whenever H.M. Shander releases a new book.