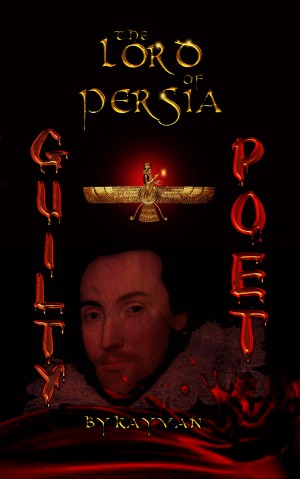 Considering the sexist pen that the poet used in one specific play and its cultural ripple effect that could impact women's rights in the future, the soul torments the playwright through a cross-examination.

Kayvan was born in Shiraz, Iran. He studied, French literature, and the philosophers of the age of enlightenment at the Faculty of Literature, Art & Sciences in Nice.

Although he had a successful career in real estate, he left French Riviera, behind, and moved to the U.S., to develop his political and artistic purpose. He taught himself English and studied, world history, political science, English literature, the American Revolution, history of Persia, Russia and France and both World Wars.

He has made three movies: A comedy based on Oliver Twist. A romantic drama, shot in Los Angeles in 1999. An experimental sci-fi film based on climate change. Kayvan wrote two screenplays, one on reincarnation of a Greek philosopher, and other on a fictional rock band.

Review
Annaleichuchu reviewed on on Nov. 4, 2015

This was such an amazing story! I am a huge fan of Shakespeare and always want to read books that relate back to him in some sort of way. I loved how the author focuses in on Shakespeare and the adventures that he went through. An ancient King of Persia time travels all the way back to Shakespeare’s time to interrogate him on 3 charges. Shakespeare can’t believe that he has time traveled back all this way to ask him about these allegations. The King of Persia won’t give up and keeps providing evidence to support his claim. This was quite the fascinating story that I just couldn’t seem to put down!

You have subscribed to alerts for Kayvan DeBash.

You have been added to Kayvan DeBash's favorite list.

You can also sign-up to receive email notifications whenever Kayvan DeBash releases a new book.