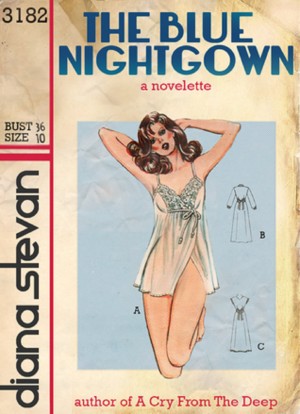 Diana Stevan, the author of A Cry From The Deep, recalls her growing up years in Winnipeg, a prairie city in the middle of Canada. It was a time when Father Knows Best won over TV audiences, Elvis Presley gyrated his hips only to be censored on the Ed Suillivan Show, and Marilyn Monroe promised a sexual escape on the big screen. At home, aprons figured in kitchens and dads brought home their lunch boxes. All was neat and tidy except for those private interludes in bedrooms. Though only 48 pages long, this novelette demonstrates that the 1950s were not as innocent as they seemed.

Diana Stevan likes to describe herself as a Jill of all trades. Her eclectic work history serves her well in her writing. She worked as a family therapist, a professional actor, professional model, teacher, and a freelance writer-broadcaster for CBC Televisions Sports Journal.

Diana was born in Winnipeg, Manitoba, where she received her Bachelor of Science in Home Economics with honours and Master of Social Work, graduating on the Dean&#39;s honour list.

In the last several years, she published poetry in the U.K. journal, DREAMCATCHER, a short story in ESCAPE, an anthology, and THE BLUE NIGHTGOWN, a novelette available as an e-book. A CRY FROM THE DEEP, is her debut novel, one that is genre bending (mystery, adventure, romance).

In 2016, Island House publishing released THE RUBBER FENCE, psychological fiction, a novel inspired by her work on a psychiatric ward in 1972.

Diana lives with her husband Robert on Vancouver Island, in beautiful British Columbia. You can visit her at http://www.dianastevan.com or at https://www.facebook.com/dianastevan.author

You have subscribed to alerts for Diana Stevan.

You have been added to Diana Stevan's favorite list.

You can also sign-up to receive email notifications whenever Diana Stevan releases a new book.