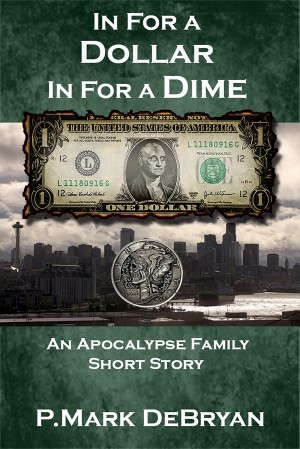 In For A Dollar In For A Dime

By P. Mark DeBryan
Rated 4.00/5 based on 1 review
The Flu Pandemic was bad, the vaccine made it worse. Now a family fights to reunite in the throws of the chaos that ensues. Creatures thirsty for human flesh come out at night to find their prey. Ryan must find his family, he must survive. More
A trip to the Pacific Northwest is interrupted by a deadly virus. Fighting to survive, fighting to reunite. Ryan Brant hasn’t seen some of his family for 18 years and is flying into Seattle Washington to attend the family reunion. The Brant family is spread out across the country and all are headed to the reunion; some travel by car, some by air, and one in a high end luxury Motor Coach. The Cape Town Flu has brought the world to its knees and the vaccine the CDC created has just made the situation worse, much worse. Join them as they try to find each other in A New World that has collapsed around them and millions die of the flu, or wish they had.
Download: epub mobi (Kindle) pdf more Online Reader
rtf lrf pdb txt
Price: Free! USD
Add to Library
Create Widget
Tags: zombies apocalypse zombie action prepper fiction dystopian action thriller survivalist fiction
About P. Mark DeBryan

Mark has always been a bit of a vagabond. Born in Washington, raised in California he joined the Coast Guard after high school. His first assignment after boot camp was as the driver for the admiral of PACAREA in San Francisco. After a short stay working at a LORAN station, he went for a cruise on a 378´ cutter in the Bering Sea, then onto aviation where he was a crewman of both fixed-wing and rotary aircraft in Texas. After four years in the Coast Guard, he worked security, first guarding MX nuclear missiles, then at a nuclear power plant in California. Eventually he went to college in Wisconsin, only to drop out after meeting his future wife. He went on to finish college at 36 and own a Miracle Ear franchise. He went into publishing for a short time before becoming an information systems specialist. He currently lives in Pawley's Island South Carolina.

Reviews of In For A Dollar In For A Dime by P. Mark DeBryan

This is a short, action packed prequel to the novel Family Reunion. It follows several characters who are travelling across America to a family reunion just as a flu type virus brings on the zombie apocalypse.

Ryan is on a Puget Sound ferry when the outbreak begins and is trapped by zombies everywhere. I liked him instantly because he is terrified to the point of panic and physically wetting himself. He is also vomiting at the sight of mauled bodies which is also a believable reaction for an ordinary man. I liked that realism in the character. It was nice to see a male character so scared instead of being big and brave. He is close to the meeting point for the family and tries to keep in touch with brother Max. Max is at the airport to collect his stepdaughter Lisa but the military have quarantined the building, leaving Mike to find a way in as Lisa tries to find a way out.

I liked the switching POV of these three characters as we followed the different problems they had-Max dealing with jittery soldiers, Lisa dealing with pervert airport workers and zombies, and Ryan dealing with more zombies than he can handle. It keeps the action non stop and the tension high and I felt that for it being a short story, it kept you interested and you cared what happened to these three people.

My very slight niggle is that the characters don't want to use the word zombie to describe the infected. We seem to get lots of novels that call them all kinds of strange variations. In this book, zombies are called 'zekes'. I don't get it personally...I mean, 'zombies' was good enough for the likes of Romero! For me, if it is trying to eat your brains, it'a zombie! Seriously, that's just my preference and makes no difference to me in the story!

I am very interested in going on to read the first novel in the series which follows all of the family who are making the journey, hoping to find each other safe and sound. I think this series has great potential and I'm excited to read it!

You have subscribed to alerts for P. Mark DeBryan.

You have been added to P. Mark DeBryan's favorite list.

You can also sign-up to receive email notifications whenever P. Mark DeBryan releases a new book.