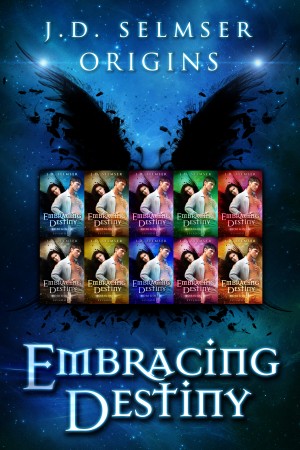 By J.D. Selmser
Before Damien could defy Death for love he had to find love worth dying for. See how it all started

When J.D. Selmser is not too busy 'saving the world' or 'being awesome' he enjoys chasing sunsets and waterfalls. OK maybe he does not save the world, but he is always dreaming big and chasing those dreams wherever they might lead him. He is a hopeless romantic who traveled 1100 kilometres every weekend just to spend less than two days with the woman he is in love with until she was able to move to be with him.

Monday through Friday, he's an IT ninja, defending "the people and their computers" against nasty viruses and hackers. Wielding his mouse like a set of flaming nun chucks, causing most unwanted applications to shrivel back in shame. By night and weekends he is the king of scary monsters and romance sitting at his computer writing about endless love and those that grab hold of it and never let go, no matter.

About the Series: Origins

Before Damien could defy Death for love he had to find love worth dying for. See how it all started

You have subscribed to alerts for J.D. Selmser.

You have been added to J.D. Selmser's favorite list.

You can also sign-up to receive email notifications whenever J.D. Selmser releases a new book.