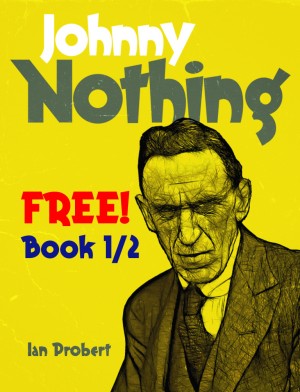 Johnny Nothing – Free half a book

By Ian Probert
Rated 4.00/5 based on 1 reviews
WARNING: This book will seriously damage your funny bone. The poorest boy in school has just inherited £1 million. But there is a catch: If he can hold on to his cash for a whole year he will earn ten times that amount. Enter Felicity MacKenzie, the ugliest, sweatiest, vilest, cruelest, hairiest mother in the western world. More
To celebrate the upcoming launch of 'Johnny's Dead', the best-selling 'Johnny Nothing' is available for free for a limited time.

Johnny Nothing is the hilarious story of a boy who inherits £1 million, only for his thoroughly horrible and rotten mother to steal it from him. Here are some of the things that readers haver said about Johnny Nothing:

“Great new kids book alert! My two are in hysterics reading Johnny Nothing by Ian Probert (and I am too).”
Jane Bruton, Editor of Grazia

"Oh, Wow. Dark, sordid, grotesque and hilarious are only a few words I can conjure up to describe this hilarious book."
Lizzie Baldwin, mylittlebookblog

"The humour will have adults as well as children in hysterics at the writing."
Joshua Jackson (13), Lizzie Loves Books

"It pokes lots of fun at grown ups and all the things we take seriously and think are important, and addresses all the topics that parents might squirm in embarrassment at, but which will have children in fits of giggles and laughter."
Paul Ruddock, Echoesofthepen

"A very unique, dark, comedic tale that truly tickles your funny bone. I thoroughly enjoyed reading this book, at times laughing a bit too loud, and I highly recommend reading it."
Angela Burkhead

"It’s not all that likely that Grandma or Auntie Mae will buy this book for their own little Johnnys. But Dad will and he’ll probably want to read it first. I can see Johnny Nothing being just the sort of thing that catches on and takes off in a BIG way."
Melissa Ann Goodwin, author
Download: epub
Price: Free! USD
Add to Library
Create Widget
Tags: kids children humor funny humour funny books for kids children 10 to forever ian probert
About Ian Probert

Ian Probert has been scribbling down words ever since he learned to spell the phrase: 'Once upon a time...'. He is the author of Internet Spy, Rope Burns and a bunch of other titles. Internet Spy was a bestseller in the US and made into a TV film. Rope Burns is a book about why books shouldn't be written about boxing. Ian has also written things for a shed load of newspapers and magazines. When Ian was a student he used to write lots of letters to the bank manager.

Visit https://ianprobertbooks.wordpress.com for random thoughts about the universe and the price of tea.

Go to http://ianprobert.com to increase traffic to his website, which is apparently very important.

This review is from the full book. I don't know how much is offered in this free half.

Johnny Nothing is probably the perfect book for singularly imperfect boys. But it’s not all boogers and bodily fluids—there’s some wonderful language lurking behind the irreverence, such as when Johnny is compared to a “colour.” The humor is very English, convincingly teen and male, and somewhat smelly. Some readers might find it wearing after a while, like the worst of British TV imported to the States. But others, many of them unwilling readers aged from 10 to 18, will assuredly love it. There’s a boyish exuberance combined with a fascination for bodily functions; there are wonderful lists of puns from a round-the-world trip; and there’s the usual attraction of poor hopeless boy, powerful hopeless guardians, and unexpected opportunity. Of course, the powerful guardians—large obnoxious mother in particular—are amply skilled at the thwarting young Johnny’s plans, but a surprisingly wise lesson in failure might change things around.

No thing is spared the sharp knife of humor and scorn in this tale. Politics and religion aren’t forbidden, and neither is BO. Names like Ebenezer Dark and Johnny Nothing offer a pleasing sense of fantasy. But, on the whole, this probably isn’t a book for reading moms. Combining the worst of boyhood infatuations with a well-plotted storyline and well-written scenes however, it just might make readers out of their pre-teen sons.

Disclosure: I was given a free ecopy and I offer my honest review.

You have subscribed to alerts for Ian Probert.

You have been added to Ian Probert's favorite list.

You can also sign-up to receive email notifications whenever Ian Probert releases a new book.