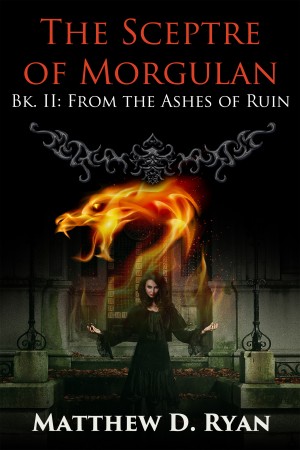 The Sceptre of Morgulan (Bk. II: From the Ashes of Ruin)

By Matthew D. Ryan
Rated 5.00/5 based on 4 reviews
Coragan of Esperia has another job to do. Can he and his companions capture the Sceptre of Morgulan and prevent an apocalypse? Or will Korina outmaneuver them again and escape with the prize? So much hinges on the efforts of so few—if they fail in their quest, if the evil witch Korina the Black succeeds, she may gain an unrivaled power; a power she will not hesitate to use. More
Dark Cults. Ruined Castles. And Ancient Magic: The ingredients of life in Athron.
The ancient cult of demon worshipers known as the Children of Lubrochius has grown numerous and strong. Can they lay claim to the artifact their leader, the sorceress Korina, longs for: The dreaded Sceptre of Morgulan? Who can stop this devilish sorceress with her eye on the city, the sceptre, and more?
Regecon and Ambrisia fight to restore their guild. Coragan of Esperia is imprisoned and facing execution. Galladrin, Borak, and the others are caught up in a desperate game to prove Coragan’s innocence and bring down the ancient demonic cult that framed him. But all that is distraction and shadow. Even as each of the heroes struggles with his and her tasks, The Children make their move. And if they are successful, nothing will be able to stop them. Buy The Sceptre of Morgulan now.

Matthew D. Ryan is a published author living in upstate New York on the shores of Lake Champlain. He has a background in philosophy, mathematics, and computer science. He believes he saw the legendary Lake Champlain Monster (a.k.a Champy) once during a nighttime adventure with his brother canoeing to Valcour Island. His work has been featured on-line at Aphelion.com and YesteryearFiction.com. He has been deeply involved in the fantasy genre for most of his life as a reader, writer, and game designer. He is the operator of the web site matthewdryan.com which features his blog, “A Toast to Dragons,” a blog dedicated to fantasy literature, and, to a lesser extent, sci-fi. Mr. Ryan says he receives his inspiration from his many years as an avid role-player and fantasy book reader. He has spent many long hours devising adventures and story-lines as well as gaming systems for role-playing games. He has played a motley assortment of characters in RPG worlds, and digested the writings of J.R.R. Tolkien, Robert Jordan, and others. As a result, he is quite comfortable in the fantasy genre and feels it was a natural shift for him to move into fantasy writing.

Mr. Ryan is the author of the exciting dark fantasy novels "Drasmyr," "The Children of Lubrochius," and "The Sceptre of Morgulan," as well as a growing number of short stories. His first novel, "Drasmyr," won the book of the month award on Long and Short Reviews: Young Adult for the month of September 2012. The story features a traditional Dracula type vampire in a Middle-Earth type setting. It is a dark fantasy geared toward teens and adults that has consistently earned reviews in the four and five star range. Drasmyr serves as the prequel to the series "From the Ashes of Ruin." In addition to this series, Mr. Ryan has published several short stories on-line, including: “Haladryn and the Minotaur”(published at the now defunct Pegasus On-line), “The River’s Eye”(published at YesteryearFiction.com) , “Escape”(published at Aphelion.com), and the three-story collection "Of Dragons, Love, and Poison." He has also spoken on the topic of “World-Building” utilizing his considerable experience as an author and game-designer. When not engrossed in his fantasy worlds, Mr. Ryan can be found volunteering at the local food shelf or playing with his cat, Confucius, who is as wise and wily as his name suggests.

Also in Series: From the Ashes of Ruin

Thank you Matthew D Ryan for giving me a copy of this book to review! I think this is the best book in the series yet, and I loved the cliffhanger ending! Matthew's writing draws you right into the story, it is easy to visualize exactly what is happening. I think one of his greatest gifts is foreshadowing, you get hints at what is coming from the first book, the second book, and throughout the third. The Sceptre of Morgulan is a wonderful blend of fantasy, adventure, and horror. The series has left me rooting for everyone but Korina, including the dreaded vampire. I also like that the tale has moral lessons; for example, the higher classes are forced to realize that everyone has a value whether they are wizard or servant. Many of my favorite elements are in this epic tale, jI love magic, vampires, demons, adventure, and horror. I can only hope that Matthew Ryan will include me once again in the ARC reading of his wonderful creation, because I am very excited to find out how this all comes to a conclusion!

I don't often read fantasy but I was a big fan of Matthew D. Ryan's blog atoasttodragons and gladly accepted an offer to read an advanced copy of his latest book in exchange for an honest review. I had read Drasmyr and The Children of Lubrochius and loved the idea of blending vampire horror with wizards and goblins more generally associated with the fantasy genre.

The timing was perfect since it was spooky Halloween season and nothing says October and autumn like Vampires and Demons and blood sacrifices, oh my! I can't even put into words how well this story fulfilled all my fright-night desires. No wussy, romanticized vampires here, oh no. This is the real deal - blood sucking, life stealing, raw evil power on display. My only complaint is that some of the plot points were loudly telegraphed in advance and would have provided more of a shocker had they emerged in a more surprising way (or maybe I'm just really good at figuring stuff out, but I doubt it). But on the whole, this installation in the series deftly moved the story along and left this reader impatient for the next book in the series (in which I hope someone finally does a Nurse Ratched on that horrible Korina, evil, greedy seductress that she is!). Strangest thing is, as much as I like our cast of heroes, I really kind of want to see Lucian destroy them all. Call me twisted, but I'm rooting for the vampire!

This book is the best in the series so far! Honestly, it is. I found myself being a silent participant of the wizards guild, a ghost following along with Coragan, Galladrin, and Borak, and a spy spying on the cult the Children of Lubrochius. Korina is as evil as ever and she is going to stop at nothing to get what she wants. That means even summoning a demon that could destroy her and everything she has worked for. As for creepy vampire, well lets just say he has a few things up his sleeves. Lets hope the Wizards Guild will be able to save their city and people.
I couldn’t put this book down, I was so enthralled by it that I was even sneaking reads while working! If you are into creepy stories, vampires, wizards, demons, and cults, this is a book for you! The story is great and I can’t wait to see what lies a head for every character! I’m very happy I got this book as an ARC read!

Still, not a sparkle in sight! Another wonderful read, detailed, exact, and imaginative. Fantasy and a bit of horror done well.