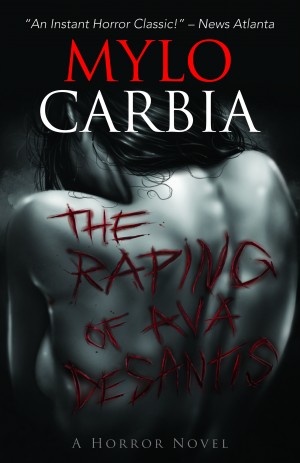 The Raping of Ava DeSantis: A Horror Novel

"Best Novel Of The Year" — Great-Novels.com

"Best Thriller Of The Year" —Top10Novels

Set in 1991 in Atlanta, Georgia, "The Raping of Ava DeSantis" tells the story of a working class college student who is brutally attacked by three wealthy fraternity brothers, then confronted with the decision of a lifetime: accept money to stay quiet or seek justice with the police. What she does in response is the basis of this captivating woman’s revenge thriller story that will have readers talking for years to come.

With brilliantly written characters, bone-chilling, fast-paced scenes and a double twist ending, "The Raping of Ava DeSantis" is the perfect blend of suspense, thriller and horror — guaranteed to entertain both female and male readers alike.

AUTHOR: Mylo Carbia spent her childhood years writing to escape the horrors of growing up in a haunted house in Jackson, New Jersey. After years of ghostwriting films in Hollywood — earning her the nickname “The Queen of Horror” — she moved into the literary world to write a series of bestselling novels all featuring strong female protagonists. "The Raping of Ava DeSantis" is her debut novel.

FIND OUT WHAT EVERYONE IS TALKING ABOUT... ORDER YOUR COPY TODAY!

MYLO CARBIA (a.k.a. "The Queen of Horror") is an American screenwriter turned #1 BESTSELLING AUTHOR widely known for her work in the horror, thriller and science fiction genres. Born and raised in Jackson, New Jersey, Carbia spent her childhood years writing to escape the horrors of growing up in a haunted house. Her very first screenplay was optioned 28 days after completion, earning Carbia a "three picture deal" and the cover of Hollywood Scriptwriter in 2003. After that time, she quietly penned numerous film projects under her production company Zohar Films, earning the reputation of being Hollywood’s Number One Horror Film Ghostwriter. Carbia recently moved into the literary world to release a series of bestselling novels all featuring strong female protagonists. Her debut novel "The Raping of Ava DeSantis" hit #1 Bestseller in Horror weeks before its official release date, and continues to receive critical acclaim from both avid readers and critics worldwide.

You have subscribed to alerts for Mylo Carbia.

You have been added to Mylo Carbia's favorite list.

You can also sign-up to receive email notifications whenever Mylo Carbia releases a new book.