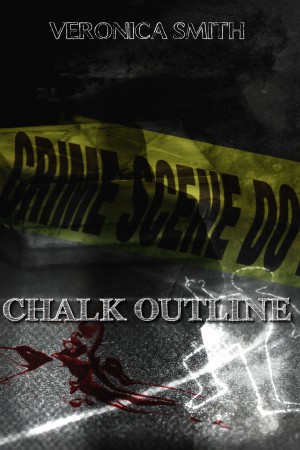 Veronica Smith once fancied herself the next Carolyn Keene when she was but a pre-teen. When she reached adulthood, she wanted to be the next Stephen King or Anne Rice. Now that she's older and wiser, she realizes it's better to want to be herself and morphed into The Mistress of Horror. Besides writing, she developed an obsession for all things horror, and even started many petitions to make Halloween a year-long holiday. Despite the support of several Senators and a retired US President, the bill was vetoed in the House. To her chagrin, Halloween still remains a one-day holiday only. But she decided to improvise, putting out her Halloween decorations in the yard at Christmastime as well. So far no one has had her arrested for it. She and her husband live in Katy, Texas with their son and several pets, including a small horse-sized mastiff.

Author Veronica Smith sets out to put the creeps up you with this baby. Chalk Outline, A horrific thriller with a very real threat that could be oh so close to home, the pace will have you thumbing through your ebook device like lightning (I stayed up till 2am to reach the end) Can't wait to see what she pens next for us.

You have subscribed to alerts for Veronica Smith.

You have been added to Veronica Smith's favorite list.

You can also sign-up to receive email notifications whenever Veronica Smith releases a new book.