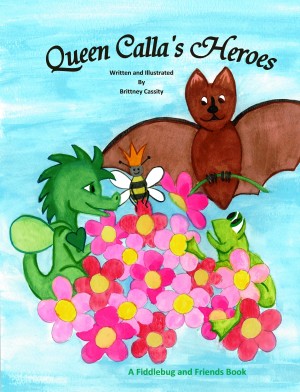 Price: $0.99
Free! USD
Buy with coupon Use the code AG100 at checkout to get this book for free during our site-wide promotion!
(Offer good through May 31, 2020 )
Have a better coupon?
Add to cart, then apply your coupon
Add to Library Give as a Gift
How gifting works
Create Widget
Tags: friends bees helping others fiddlebug
About Brittney Cassity

In 2007, while her husband was working in Iraq, Brittney Cassity took up her pencil, paintbrush and commercial art background to create a book for her sons. It centered around the bedtime stories she had been telling them involving the adventures of a rather small dragon. The book born in 2008 from this process and a lot of support from her family was named Fiddlebug and has since touched more children and their parents than could have been guessed when the first words landed on the page. Fiddlebug and his friends are even now giggling their way to future stories that bring families closer and carry sweet dreams to little minds.
Then, in 2010, a feisty new character sprang into being in the middle grade chapter book, Clyde the Undead Dust Bunny. Written in her newly acquired tree house studio in the front yard – repurposed the second her boys outgrew it – Clyde firmly settled Brittney’s feet on the writing path. The book also introduced Brittney to a whole new audience and led to the creation of “Kick Starts for Creative Writers”, a six week workshop intended to help reluctant writers find ways to make the blocks dissolve and the process more fun.
The Wednesday’s Words Weekly Planner, released in 2011, is an offshoot from a former weekly blog and helps Brittney keep a very busy schedule of homeschooling, writing, illustrating, workshop presentation, school visits, and other special events in order… and in perspective.
When she is not happily swimming in the waters of her literary life, Brittney spends her time marveling at her luck in living with one spectacular husband, two phenomenal (and almost grown) sons and a menagerie of furry, four-legged family members in a log cabin on the side of a beautiful West Virginian mountain.

You have subscribed to alerts for Brittney Cassity.

You have been added to Brittney Cassity's favorite list.

You can also sign-up to receive email notifications whenever Brittney Cassity releases a new book.