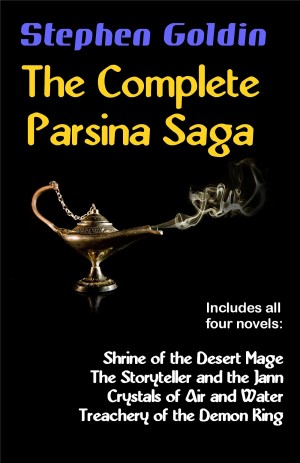 By Stephen Goldin
Rated 5.00/5 based on 1 review
This boxed set comprises all four novels of the Arabian Nights-style Parsina Saga. Impoverished storyteller Jafar al-Sharif and his daughter Selima incur the wrath of the world's mightiest wizard, starting them on a long and dangerous journey through an exotic world of djinni, undersea cities, flying carpets, and demons in their attempt to save humanity from the powers of evil. More
The Parsina Saga is an Arabian Nights-style epic fantasy tale, weaving romance and adventure through a world of djinni, undersea cities, flying carpets, and demons. It comprises four complete novels: Shrine of the Desert Mage, The Storyteller and the Jann, Crystals of Air and Water, and Treachery of the Demon King.

Now all four of these novels are gathered together in a single boxed set, priced to provide a considerable savings over buying each of the books separately. The complete story appears, unexpurgated, in this one volume.

Impoverished storyteller Jafar al-Sharif is mistaken for the thief of a holy urn. He and his daughter Selima escape capture by impersonating mighty wizards--but this imposture brings them into further danger, and sets them on a journey around the world to recapture a lost relic. Meanwhile, the real thief of the urn is in league with the king of the demons to enslave the world under the power of evil.

About the Series: The Parsina Saga

The Parsina Saga is an Arabian Nights fantasy epic set in a world of djinni, undersea cities, flying carpets, and demons.An impoverished storyteller must masquerade as a powerful wizard to save not only his daughter's life, but the entire world.

Also in Series: The Parsina Saga

Reviews of The Complete Parsina Saga by Stephen Goldin

As a child, I loved the Tales of the Arabian Nights, of djinns and wizards, clever thieves and maidens-in-peril. The Parsina Saga has that same feel of exotic landscapes and ordinary people caught up in the clash between ancient good vs. evil. I could smell the spices and feel their exhaustion as they stumbled through desert heat, cheered for the characters who jumped right off the page, and found myself staying up late into the night to read 'just one more chapter' like Sheherezade's mad sultan.

What was most interesting about this series is the fact it's not your same old boring re-hash of Lord of the Rings (which, let's face it, while we all love it, does every … single … epic fantasy series really need to be set in a medieval world?) I found myself running to the computer to google exotic words such as caravansary which, while I understood perfectly in context of the story was a camel-stable, I just -had- to find out if such a thing existed in real life (they did). Of course then I fell down the Wikipedia rabbit hole to learn about djinns and the ancient caravan routes. Some of the ruins of these caravan-cities were beautiful (google Qalaat al-Madiq). After reading this series, I could picture what they must have looked like in their heyday.

While the length and worldbuilding in this series was excellent for a hard-core epic fantasy doorstopper fan like me, I would feel very comfortable giving these books to my teenage daughters to read. Fingers crossed: maybe THEY will fall down the Wikipedia rabbit hole as well. There is a nice blend of characters of different ages, genders, backgrounds and personalities that there is something for everybody. I think I learned more about the history and geography of the Middle East than in two semesters of World History classes.

My only criticism is the first chapter starts out with an 'old style' history of the city from an omniscient narrator. I'm an action-oriented reader, so I was a lot happier once I got into the head of the characters and started seeing the city through their eyes. Once there, I was absolutely hooked through the next 1,000+ pages of epic goodness.