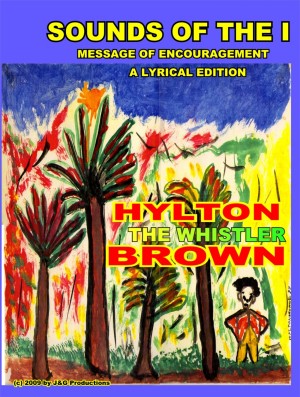 Sounds Of The I Message Of Encouragement

Hylton W.Brown was born in the hills of Jamaica in the 50ties and grew up in Montego Bay, beloved by everybody who gets to know him a bit more. Beloved for his wisdom, his compassion, his generousity and for his musical talent.
From early his mind was on expressing his knowledge by singing it in a song. And as a higher level he added the whistling.

In a time like this where the world drifts to a turning point, the voice of a man like him might make the difference. Who can calm down the storms? Remember:
A hungry man is an angry man. Who the suffering people are willing to listen to, if not a man who knows what he is talking about, a man who shares the experience of sufferation, a man who can talk their language?
And at the same time he did gather knowledge in babylon, studied the system and the human psychology. He does know the language of the socalled educated people too. And among them he found good and bad.
So the unification will have to cross all borders, the borders of religion, of race, of countries and the borders of material background.
People, all you who want to heal the world, listen to the wise peaceful thoughts he is sharing. Faith can move mountains, and together we will.

Hylton"The Whistler"Brown is a man of countless talents.He can talk, address the word powerful to the audience. Sing in a golden tone of voice,make words reach.Dance or shuffle with mighty speedy energy.Then again improvisate, change style from singing to DJ to bongo drumming. Lick straight into my heart. But, and this is a but - the highpoints of his performance ever when he touches the whistling. Clean, crystalclear flying spirit. Yes.
His musical road began in the early 1980ies in Jamaica, where we won several awards at the prestigeous Jamaican Pop & Variety Festival, first as singer, later he introduced the whistling to this big audience. And the beauty and perfection of his whistling performance was considered so uncomparable that the jury created this year a new award, just for him: "novelty act-whistling".
In this style of whistling he is up to today the master.
In Europe, apart from numerous live concerts in Germany, The Netherlands and Poland, openings for Eric Donaldson, Mutabaruka and Jamaica Papa Curvin, he continues to produce new songs in his roots-reggae-mix. Such as the golden hit ear-wig "Ever whistling" and many more. Until now he released a lot of CDs. A fine selection of his tunes you find on "Hits of Hylton Brown" listen anywhere online. And what a perfect and natural musical explosion his live CD "In his glory" from the openair festival Reggaejam in Germany. From the same show he released a DVD, which gives you a deeper impession of the stage presence of this master of performance.

Settling between Montego Bay and Bremen, he opened a cultural shop, introducing reggae and the Rastafarian message to the German people. Hylton Brown also started to forward the conscious vibes through regulary broadcasts in the radio and TV station Bürger Kanal-Bremen. What at first was a single television show - some rootsy livemusic, some documentary movies about Jamaica - turned out to be an astonishing success story: "Movements of a rastaman" became a bi-monthly series,passing the 250th !! showcase.

With the same compassion he features a very special "Reggae our radio show".
You can access these both very lively radio and tv-shows also via internet - and the new technologie makes his show reach out to a worldstage, while his popularity is rising incessantly.He takes the stages across the US,from Wichita to Salt Lake City, Ashville and Las Vegas, he performes at the biggest North German Reggaefest, the International Whistlers Convention in North-Carolina, the TV station Tele 5, he teaches music at the Polish University of Warsaw, he produces for the Polish label JAM, for the German label J&G Productions and for Dymamic Sounds, Kingston Jamaica.
Now you can get his music anywhere in the world through CDbaby, ReggaeCD or any digital distribution like iTunes, Rhapsody .......
To get deeper the message he published the book :"Sounds of the I". Can we heal our planet? Yes.
Please, read and understand and take action.

You have subscribed to alerts for Hylton W. Brown.

You have been added to Hylton W. Brown's favorite list.

You can also sign-up to receive email notifications whenever Hylton W. Brown releases a new book.