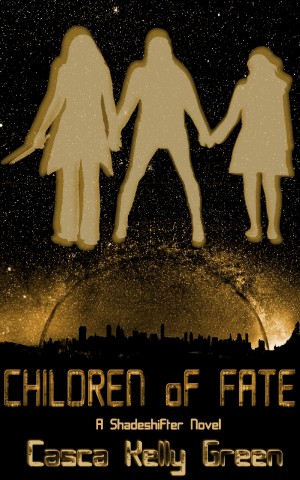 Children of Fate: A Shadeshifter Novel

By Casca Kelly Green
Rated 4.00/5 based on 1 reviews
The Dome is a dangerous place, but for three young women with powerful new abilities, the Dome is not to be feared, but fixed. Who will they sacrifice, to rebuild their distorted world?
When fate is pulling your strings, do you pull back harder, or do you cut yourself free? More
To drive someone else insane, you have to go a little mad, yourself.

Moira has a plan: break one man to fix the Dome. The most powerful Precog alive, she thinks she knows exactly what she’s dragging her sisters into… but does she, really, in a Dome full of blind spots?

Mnemosyne lives with one of the most powerful Dome families, protected among the elite and surrounded by luxury known to few in the Dome. Nobody ever considered that innocent Mnemosyne, herself, might be something worth fearing.

Leandra figures she stands to profit the most from this plan. She can capitalize on the “hereditary evil” running through her veins, controlling it to become a new kind of heroine--or assassin--for a new generation. Unfortunately for Lea, her deadliest enemies are the gaps in her memory, and her own ambition to defy fate.

Casca Kelly Green is a bisexual, polyamorous, neuroatypical, secular Buddhist writer living in the United States. When not writing, Casca teaches piano, works as an English and Latin tutor, and studies to be a disability advocacy lawyer. Casca lives with a rabbit, a cat, and too many houseplants. Casca likes fuzzy blankets and dislikes tea.

Casca is the author of the Shadeshifter Chronicles, coming in 2015 to Amazon Kindle and Smashwords.

I received a review copy of this book in exchange for an honest review, and WOW am I glad I took the time to read this! It lives up to its premise, and is an engaging, creative and clever read.

The overarching plot is complex and unpredictable, with shifting loyalties and a long-term end goal keeping things interesting at all times. The diverse range of abilities in this universe allows for plenty of clever surprises. Think of this as a no-holds-barred, mature, dystopian sci-fi version of the last few Harry Potter books. The narrative never slips into being pretentious or using purple prose to dramatize; instead, the plot and the characters speak for themselves. The ending is a little weak, but at least is realistic and leaves the series open to future installments.

If the lengthy exposition of the Introduction turned you off a bit, you're not alone in that, but have faith - by the middle of chapter 3 I was solidly hooked and couldn't hardly set this thing down to concentrate on work.

The characters are also amazing and original without relying on fake quirks to distinguish themselves. Most of them are clever, conniving, and outright malicious at times, but that's part of what makes this book and its plot so amazing. The three sisters took a little too long to grow into truly distinct entities, but I think this is partly due to just how fast the pace of the plot is - there's not a ton of time for character development at first. Be patient, though, because the characters do develop in time, and it is well worth it. It also took me a while to navigate some of the name changes, but these are luckily few and far between.

The only thing that kept this novel from reaching its full potential is its pacing, which often made it hard to appreciate the depth of the plot and characters. For example, action scenes sometimes went far too quickly, with little build-up or suspense. Sometimes that fast pacing also resulted in actions and motivations not being explained clearly, and a few times I found myself rereading a paragraph or two because I felt like I missed something. Certain scenes had the opposite problem, where there are large chunks of dialogue that help with character development, but slow the plot down too abruptly.Usually the graceful use of foreshadowing and plot twists helps mask these problems, though, and keeps the reader engaged. (Plus, a generally fast-paced novel is always going to be better than one that's too slow, so the pacing was still manageable for me, and it shouldn't be a deal-breaker for readers!)

Overall, this is a recommended read for fans of sci-fi, fantasy and longer novels in general. I look forward to future installments and will be following this author closely, because I get the feeling that future releases will be just as innovative and engaging. Authors typically only get better over time, after all, so with some work on pacing and clarity, the next installment will almost certainly be earning a 5-star review.

You have subscribed to alerts for Casca Kelly Green.

You have been added to Casca Kelly Green's favorite list.

You can also sign-up to receive email notifications whenever Casca Kelly Green releases a new book.