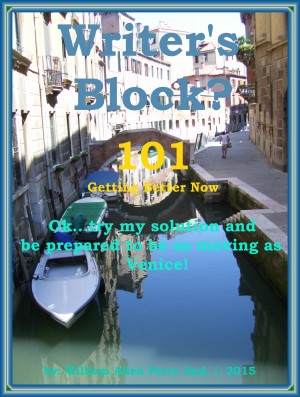 By William Allen Perry 2nd
Do you want to continue to write or do you want to do something else? Of course there is the 3rd alternative of writing part-time and also doing something else. Your answer may be here, now. This is a cheap educational process that produces results concerning your future. You can extinguish writer's block forever. More
It came to me that I had to move thru this period of dismal production, the grey cloudy days... with showers thrown in to upset me more. I was not being a good anything...partner, mate or good writer because I didn't know what was causing my problem. Nothing helped until I realized that there was a problem. So, sitting for several periods and turning out rubbish that wasn't worth the paper that it was printed on, it finally came to me that there must be a better way. Yes! I could quit. No! I didn't want to quit...and on and on...in a boring loop that wanted to strangled the talent that I felt was a hidden asset.

Was it right to force the brain and body into rigid positions that in the end sacrificed the qualities of the work and life?

Now you will discover my method of resolving Writer's Block. It is effective and improves the writer's talent. I challenge all writers with the 'slow-down to stop' disease to take a stab at Writer's Block with this plan. You will be surprised at what you will be able to do with as little as 10 minutes a day of your valuable time put into this system!

Romantic fiction is a part of us...it allows writers to make a better past and sometimes a better future. I think that I have accomplished those goals in my art. I hope that this site can at least entertain the reader...and give each something worthwhile to ponder. The Alma epic relates to the future of the Silicon Kingdom and how humans and other races come to terms with a massive generic-robotic force. Helen's Saga is about the fate of Helen 'after' the death of her husband Paris and the end of the Trojan War. Other historical stories also based on some evidence are 'The Sun's Eye...' which tells of the first one-god preacher and his attempt to change a long established, greedy religion in Egypt over the period of one lifetime (perhaps my best fictional book)...plus the life of Herodotus, named 'Time Travels with Herodotus' which has surprising connections. Finally, I was inspired to add certain drawings that will puzzle you about the flexibility of robotic-generics in the future.

Concerning my non-fiction, I highly recommend a true story about KOSA (Kingdom of Saudi Arabia) where many years were given in the support of kids and peace. It is called '1001 Saudi Arabian Days and Nights' and bestows an insight into the extreme Expat life that most experience. A second book called '1001 Doctor's tips for a Good Long Life' was inspired by the early death of my mother and is a collection of facts from several media providers concerning medical tips over the years; it is well organized with easy access. If you are a writer and have hit the wall, look at my book on writers-block, it works! Plus, the Perry-King story is a true look at history and human nature over 1,000 years and will doubtlessly amaze readers.

I was born in Hollywood of a father that was a survivor of WWII but underprivileged and a beautiful mother that I believe once had connections to royalty (her maiden name was King).

Thanks for your visit and best wishes; thanks to Smashwords too...there are more in production! William Allen Perry 2nd 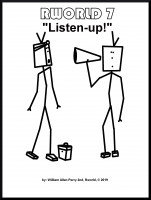 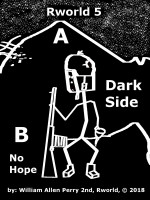 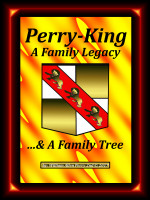 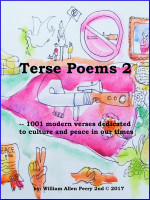 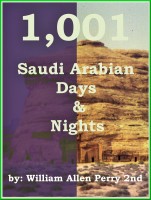 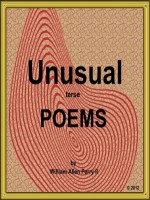 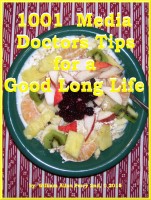 You have subscribed to alerts for William Allen Perry 2nd.

Would you like to favorite William Allen Perry 2nd?

You have been added to William Allen Perry 2nd's favorite list.