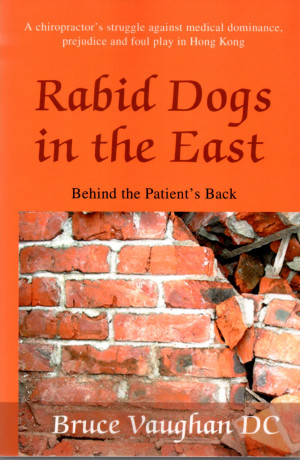 Rabid Dogs in the East

By Bruce Vaughan
An historical journey through the struggle for Chiropractic to gain recognition, inspite of strong and often malicious opposition from the medical establishment and government agencies in Hong Kong. Told from a personal perspective by the author. More
This book recounts the history of the chiropractic profession in Hong Kong during the past 50 years, from early beginnings to the hard-fought campaign for full recognition under the law--now won.
It presents a heartwarming tale of how loyalty to your principles and unwavering determination can triumph over the opposition of powerful vested interests. It is also written with unusual clarity, balance, wisdom and humor because the author, Dr. Bruce Vaughan, is not only the founding President of the Hong Kong Chiropractors' Association and Past President of the World Federation of Chiropractic, but also a published writer of fiction with an excellent command of the English language.
It carries my firm recommendation. In these pages you will find history from a knowledgeable historian, and a fascinating tale of struggle and success from a gifted storyteller. The book speaks not only to chiropractors and other stakeholders in the health care system, but anyone interested in a story about how to set goals and achieve them.

Bruce lives in Hong Kong, originally from the UK. He was the Founding President of the Hong Kong Chiropractors Association, serving throughout the often-difficult times in the profession's struggle to gain status. He also has considerable experience on the world front, having been involved with the World Federation of Chiropractic since its inception in 1988: (Was WFC President 2000-2002).
Prior to becoming a chiropractor Bruce Vaughan spent some exciting years in the fifties on the open range in Brazil as a cowboy/assistant manager and then went to Malaya where he became a rubber planter. An accident in Malaya led to his final change of career as a chiropractor. Bruce received his Doctor of Chiropractic Degree from Palmer College of Chiropractic USA in 1966.
He has practiced as a chiropractor in Hong Kong since 1966 and is now senior partner of Drs B.S.Vaughan & Associates (Chiropractors).
He was the first Chairman of the Chiropractors Council (HK), (1993 - 2002).
In recent years Bruce has become an author; books published:-
Brazilian Saddle Sores
Rabid Dogs in the East
Regenesis
A Matter of Face
The Basic Approach to SOT 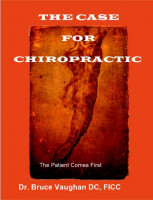 You have subscribed to alerts for Bruce Vaughan.

You have been added to Bruce Vaughan's favorite list.

You can also sign-up to receive email notifications whenever Bruce Vaughan releases a new book.