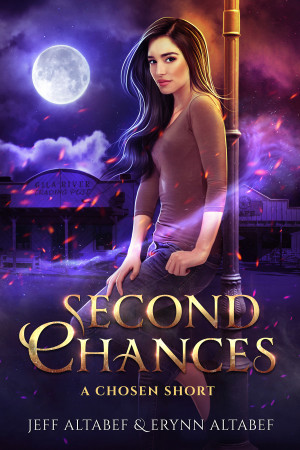 By Jeff Altabef
& Erynn Altabef
Precious and rare, second chances must be earned, but has Ayden done enough to win his? ~ Evolved Publishing presents a short stand-alone story featuring two beloved characters from the multiple award-winning Chosen series of young adult fantasies. [DRM-Free] INCLUDED: Special 5-Chapter Sneak Preview of "Wind Catcher." More
I need answers only my father can provide. Separated from birth, we’ve only recently connected. Still, I have no one else to turn to. The Deltites are hunting me and they’re close now. We’ll fight our final battle soon. Needing more information, I force him to tell me a story about the beginning, my beginning.

He sheds new light on my mom, on my grandfather Sicheii, and on how I started down this path. He spins a tale about love, a recent murder, and mysterious strangers who come to town looking for a medicine man, my grandfather.

My father reveals his own shadowy past in the story, too, but I’m not worried about who he used to be. I care only about who he is now, and who I am, and the foe I face.

He made a choice back then, and it led to all of this.

Jeff Altabef lives in New York with his wife, two daughters, and Charlie the dog. He spends time volunteering at the Writing Center in the local community college. After years of being accused of “telling stories,” he thought he would make it official. He writes in both the thriller and young adult genres. As an avid Knicks fan, he is prone to long periods of melancholy during hoops season.

Jeff has a column on The Examiner focused on writing and a blog on The Patch designed to encourage writing for those that like telling stories.

You have subscribed to alerts for Jeff Altabef.

You have been added to Jeff Altabef's favorite list.

You can also sign-up to receive email notifications whenever Jeff Altabef releases a new book.