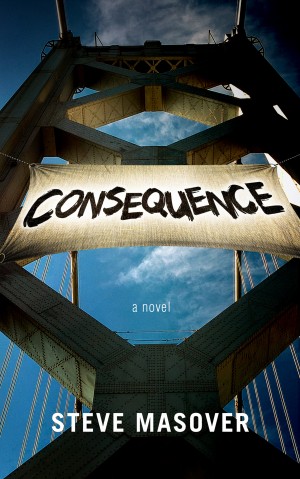 A thirty-something, underemployed layout artist, Christopher lives in a ramshackle activist collective–the Triangle–named for its Duboce Triangle neighborhood in the heart of San Francisco. Christopher and his chosen family are determined to carry on the good fight; yet the raging war in Iraq, begun in the face of peaceful protests by millions across the globe, has shaken the Triangle’s faith in the value of nonviolent dissent.

Chagall, an eco-saboteur practiced in the art of demolition, partners with an anonymous hacker who proposes an online media blitz he can detonate “at thermonuclear scale” to augment Chagall’s brick-and-mortar spectacle. Chagall invites Christopher into their developing plot to deal genetically-engineered Frankenfood a serious blow. Assured that no one will be hurt, and lured by the promise of a vast audience, Christopher contemplates writing the mother of all political manifestos.

Allison Rayle leads the Triangle’s preparations to blockade the Bay Bridge on the opening day of an international biotech meeting, to protest the environmental risks of releasing genetically modified organisms into the wild. Their aim: to hang a massive banner from the bridge’s westernmost tower at the peak of rush hour.

When the Triangle collides with Chagall’s plot to destroy a midwestern research lab, the fallout threatens everything and everyone Christopher has ever loved.

"Masover’s engaging, timely debut novel is about the line between activism and extremism. [...] This is a fast-paced and well-plotted literary thriller, examining the unforeseen ramifications of well-intentioned actions." – Publisher's Weekly - BookLife

“I couldn’t put Consequence down! Masover ... asks thorny, essential questions about personal responsibility and the role of violence in movements for social change.” – Sam Green, Academy Award-nominated director of The Weather Underground

“Here is a carefully crafted book about the necessity, and danger, of taking personal action in the 21st century. ... Steve Masover's characters ooze humanity. ... This is a human story shot in the ass with ideas.” – Doug Peacock, author of In the Shadow of the Sabertooth and real-life model for Edward Abbey's George Washington Hayduke in The Monkey Wrench Gang

“Consequence is a great read, full of building tension and excitement ... this isn’t just a book about activists—Masover writes about conflicts central to the human situation.” – Starhawk, author of The Spiral Dance and The Fifth Sacred Thing

“... exciting ... a great read ... reminiscent of The Monkey Wrench Gang.” – Scoop Nisker, author of If You Don’t Like the News, Go Out and Make Some of Your Own
Available ebook formats: epub
Price: $5.99 USD
Buy Add to Library Give as a Gift
How gifting works
Create Widget
Tags: environment politics genetic engineering san francisco sabotage activist protest gmo agribusiness environmental activism
About Steve Masover

I’m an author, activist, and recovering information technologist. I hail from Chicago, but my family relocated to the Bay Area in 1970 so I’ve spent most of my life in California. My short fiction has appeared in Garo, Stoneboat Literary Journal, Five Fingers Review, and Christopher Street. I also share screenplay credit for an anti-apartheid movement documentary, "Soweto to Berkeley" (Cinema Guild, 1988). I write, organize as a grassroots activist, and study Tai Chi Chuan in Berkeley, California.

Reviews of Consequence by Steve Masover

You have subscribed to Smashwords Alerts new release notifications for Steve Masover.

You have been added to Steve Masover's favorite list.

You can also sign-up to receive email notifications whenever Steve Masover releases a new book.