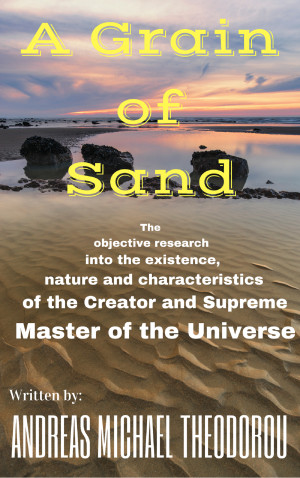 A Grain of Sand

By Andreas Michael Theodorou
Ignoring all dogmatic and axiomatic declarations, this is an objective and in all respects forensic investigation into the possible existence and nature of a Real God. The eventual conclusion provides a definitive answer based on undisputed, widely available scientific evidence and arguments according to the rules of reasoning. More
Contrary to declarations from well known scientists who claim that Science does not provide any evidence supporting the existence of God, this book proves beyond any reasonable doubt exactly the opposite. Scientific evidence does indeed support the existence of God. Nevertheless, the difference in opinion may be apparent and not real due to the fact that the concept of God does not necessarily mean exactly the same thing to different people. Atheists or agnostics referring to the concept of God as implied in the scriptures of contemporary religions, are perfectly correct in claiming that Science may not support such existence. But what if God is a totally different entity which in every respect satisfies all requirements and specifications demanded by the universal perception of a Deity? If such perception does not exist, then one can never reach conclusions which can have widespread acceptance and any investigation on the subject will be in vain and ineffective. If on the other hand the concept of God is clearly defined so that it enjoys universal acceptance, then it is possible to perform such interrogation of the available evidence in order to propose a conclusion which is supported by most people.
For the reason explained above, the investigation starts with a detailed and extensive definition of the concept of God by specifying a framework of qualities and characteristics which a Deity should satisfy, in order to be universally acceptable. This profile serves as the non-negotiable reference for all prospective candidates.
Subsequently the search delves into the domain of natural world in an attempt to identify possible physical quantities or entities which could satisfy the prescribed characteristics. Overcoming the maze of traps which had to be bypassed in order to avoid compromising the objectivity of the research, a clear, logically sound and factually supported conclusion is derived. Surprizing in its simplicity, the outcome does not only satisfy the intellect of the reader but it challenges the reader’s view of the world and the prevailing beliefs regarding a host of other peripheral concepts which are dealt in great detail in the second part of the book and under the light of the conclusions reached in the first part.
Certainly the book may not lay claim to any literary awards, but its value resides in the incredibly interesting answer it provides, effectively resolving a query that vexed human minds for thousands upon thousands of years. Audacious as it may appear, the unravelling of the ages long mystery will change the way that the world is viewed from now onwards and will establish the findings of this investigation as the most reliable reference on the subject of Creation and God.

Born in the island Cyprus to a deeply religious family, grew up amidst the liberation struggle against colonialism and the subsequent intercommunal fighting. Completing his high school education on the island, he continued his studies in Greece obtaining a diploma in light current engineering. He got married to his childhood sweetheart and they are still happily married with two children, both graduates and successful entrepreneurs in the field of Information Technology.
Due to the Turkish invasion of Cyprus he never returned to the island, emigrating instead to South Africa where he started working in a manufacturing company as a technician. In parallel he continued his studies and obtained a diploma in Datametrics (Physics and Computer Science) from the University of South Africa. He remained all his working life with the same company moving through the ranks of Manager, Production Director and eventually Managing Director. He retired a few years ago and he found the time to get involved with his real hobby of software development and design of all sorts of applications. Becoming an author was never among his intentions but, as you will realize reading his book titled "A Grain of Sand", he was left with no alternative.

You have subscribed to alerts for Andreas Michael Theodorou.

You have been added to Andreas Michael Theodorou's favorite list.

You can also sign-up to receive email notifications whenever Andreas Michael Theodorou releases a new book.