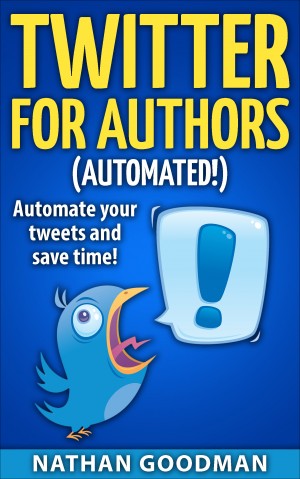 Wondered how you'd have time to promote your books on Twitter?
Wondered, isn't there an easier way?
Wondered how other authors seem to tweet constantly?
Do you wonder why everyone knows how to tweet except you?
Do you dream of an unlimited supply of book readers?
Did you know Twitter can be a big part of your free business marketing efforts, and with great results?
Would you like to know how to use Twitter to grow your book marketing?
Or a free or cheap way to get worldwide book readers?

Whatever your reasons for wanting to start Social Media Marketing with Twitter, this book is for you!

This book is action packed full of great idea's to help you get started automating your use of Twitter today!

In this book you will find:

This free Kindle ebook is full of up-to date information, hot of the press. It will help you reach goal of exploding your business using Twitter!

Take action. Scroll up and download your copy Today!

Twitter for Authors (AUTOMATED!) is not just for authors. Anyone can learn these time saving techniques to automate Twitter marketing, even if you are a Twitter beginner. You don't have enough time in the day to constantly send out tweets and retweets, do you? And who does? This book will give you simple, step by step methods to automate much of the manual work of participating in this critical social network. The book jumps right into what you need to know to help you automate your tweets, retweets, follows, unfollows, and more, but also has a complete section if you just need Twitter for dummies help.

"So much good advice. Better than a Twitter for Dummies book. It's that simple."

"Having a way to do Twitter for beginners and yet automate so much of the drudgery of constantly being expected to tweet...this will save me so much time in my book marketing efforts."

"I was swamped trying to keep up with all my social posts...and needed a Twitter for writers guide that would help me take some of the pressure off...these techniques could be used by anyone."

"...actors, indie authors, lawyers, any small business owner could benefit from automating some of the work involved in using Twitter to promote your business."

"I'd read a lot of book marketing for authors books, but this gives a simple book promotion strategy that even I can follow."

"A good Twitter for social media marketing read. And it's a free Kindle ebook!"

"I just needed to...use Twitter for business. This was such a help!"

Get a free copy of bestselling thriller, The Fourteenth Protocol, at NathanAGoodman.com/fourteen/

Nathan Goodman lives in the United States with his wife and two daughters. His passions are rooted in writing, and all things outdoors: the health of our oceans, especially the success of the sea turtles, walks on the beach, camping, and hiking. Where writing is concerned, the craft has always been lurking just beneath the surface. In 2013, Goodman began the formation of what would later become the story The Fourteenth Protocol. It quickly became a bestselling international terrorist thriller.

In the novel, which is now a series, Goodman focused on crafting a strong female lead heroine that his young daughters could look to as a role model.

Learn more about Nathan A. Goodman

Interesting title, interesting premise. Common sense message for busy people. A must-read for every writer with a Twitter account.

You have subscribed to alerts for Nathan A. Goodman.

You have been added to Nathan A. Goodman's favorite list.

You can also sign-up to receive email notifications whenever Nathan A. Goodman releases a new book.