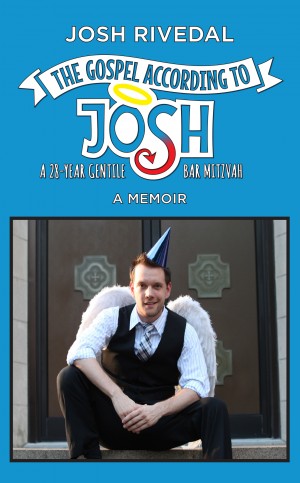 The Gospel According to Josh: A 28-Year Gentile Bar Mitzvah

By Josh Rivedal
From The Maury Povich Show to International Public Speaker…
Tortured by his thoughts, Josh finds himself standing on the ledge of a 4th floor window, contemplating ending it all; in a moment of truth, he must reach out to the only person who can help him before it's too late. A comedic and poignant tale of love, loss, struggle, survival—a journey through depression and coming out the other side... More
By the time Josh Rivedal turned twenty-five, he thought he’d have the perfect life—a few years singing on Broadway, followed by a starring role in his own television show. After which, his getaway home in the Hamptons would be featured in Better Homes & Gardens, and his face would grace the cover of the National Enquirer as Bigfoot’s not-so-secret lover. Instead, his resume is filled with an assortment of minor league theatre and an appearance on The Maury Povich Show—a career sidetracked by his father’s suicide, a lawsuit from his mother over his inheritance, and a break-up with his long-term girlfriend.

Tortured by his thoughts, he finds himself on the ledge of a fourth floor window, contemplating jumping out to inherit his familial legacy. In turn he must reach out to the only person who can help him before it’s too late.

Based in part on his acclaimed one-man show, The Gospel According to Josh is a comedic and poignant true-to-life tale of love, loss, struggle, and survival—a gospel account of one young man’s passage into manhood—his twenty-eight-year Gentile bar mitzvah.

Josh Rivedal (founder, executive director of The i'Mpossible Project) is an author, actor, playwright, and international public speaker. He has spoken about suicide prevention, mental health awareness, and diversity in more than ninety locations across the U.S., Canada, the U.K., and Australia. He has served on the board of directors for the New York City chapter of The American Foundation for Suicide Prevention. He wrote and developed the one-man play, Kicking My Blue Genes in The Butt (KMBB), which has toured extensively throughout the U.S., Canada, and the U.K. His memoir The Gospel According to Josh: A 28-Year Gentile Bar Mitzvah, based on KMBB and published by Skookum Hill in 2013, is on The American Foundation for Suicide Prevention’s recommended reading list. He writes for the Huffington Post. Coming soon in conjunction with The i’Mpossible Project: Living Mentally Well and Crushing it While in College, and Winning the War on Depression and Living Mentally Well.

You have subscribed to alerts for Josh Rivedal.

You have been added to Josh Rivedal's favorite list.

You can also sign-up to receive email notifications whenever Josh Rivedal releases a new book.