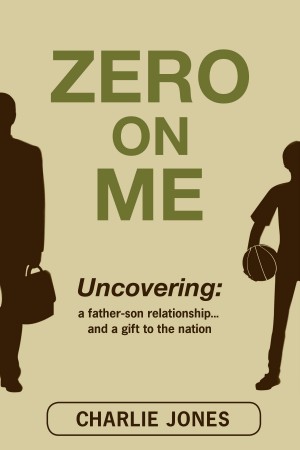 By Charlie Jones
A limited father-son relationship leads to an amusing recollection of the fabulous 50s and 60s, as a son views his childhood through a prism of “someday you’ll look back at this and laugh.” The suspenseful opening is the book's foundation. It affects both the father and son, and leads to a surprising conclusion, all effectively blended in this entertaining, unusual and true story. Enjoy sampling! More
Zero On Me is a thoroughly humorous recollection of a father-son relationship that unfolds during the fabulous 50s and 60s. It opens, however, with the father’s tension-filled episode during World War II, an incident that becomes the foundation for this true story. Following the father’s return home, his career path limits his relationship with his son – causing the youngster to seek recognition and acceptance from his peers, embrace the role of classroom comedian, frequently clash with teachers, and engage in a myriad of youthful challenges.

The son narrates this view of childhood and young adult years through a colorful prism of “someday you’ll look back at this and laugh.” He maneuvers through this nostalgic period with veiled implications and historic references that are embedded in the landscape of our society. Americana, pop culture, sports, and politics, are among the fond milestones and treasurers woven into his enjoyable and highly entertaining view of growing up – be they from new friends, teachers, the latest fad, song, movie, or celebrity. Often they are simply commonly dismissed situations that become irresistible opportunities that characterize this youngster’s maturing as he adjusts to a constantly changing world from having moved so many times.

It is only after the father’s death when the aging son recognizes that their limited time together had been enhanced by his father’s quality advice and strong values: remembrances of doing what’s expected and what’s right. In retrospect, the son uncovers an unexpected treasurer rooted long ago on a remote and forgotten battlefield. Appreciation for the sacrifices the father made leads the son to a remarkable finding that had been lost for a lifetime, a discovery that makes for a surprising and uplifting conclusion.

Readers are encouraged to sample the first few chapters.

After graduating from a small college in the Midwest, Charlie’s careers took him to Kansas City, New York City, and Chicago. A series of events led to writing about his dad after he died. But Charlie felt that a book that strictly detailed his father’s heroics and accomplishments would be one among thousands, even though there was an incredible story with historic implications to be told. He refocused his storyline to include his own youth, how his relationship with his Dad had been affected by his dad's commitments – and how it changed his own life. Zero On Me is more than just about two men. It's a fascinating and amusing look at growing up in the 50s and 60s, the challenges a youngster encounters when faced with attending one new school after another, overcoming the hurdle of blending in with a constantly changing set of new classmates, and touching on the nostalgic elements of that period – while teasing the reader by hinting at their relevance to today. Charlie describes a father-son relationship that that will appeal to young adults as well as those who grew up in a period that followed the world's most devastating war.

Charlie took a candid look at his childhood and penned a story in the way he remembered it, in the tradition of author Bill Bryson, and sometimes in the way he wanted to remember it, in the tradition of author Dave Barry (well, not quite that exaggerated). Through Zero On Me, (which is in the top 100% of all books published in 2015 – and again, aren't they all), he wants to set the record straight and squelch rumors about misguided dreams and clarify charges of his own life's renderings as being too exaggerated. All the events in the book, took place, both his father's and his.

Charlie and his wife, Beth, reside in Bowling Green, Ohio. His children reside in Atlanta, Charleston WV, Chicago, as well as Blowing Green (nicknamed by the locals who know what northern winters can do to visitors from the South). He has become accustomed to saying to friends and relatives a confident “yeah, that’s in my book,” when they mention a place, a person, or simply reference any number of situations that hint at the Americana we all remember.

You have subscribed to alerts for Charlie Jones.

You have been added to Charlie Jones's favorite list.

You can also sign-up to receive email notifications whenever Charlie Jones releases a new book.