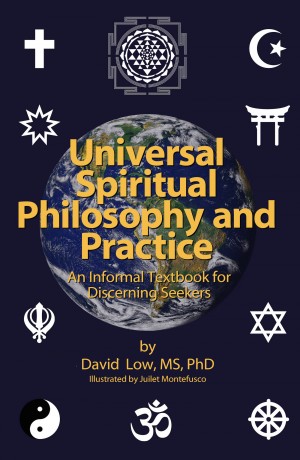 By David Low
Rated 4.67/5 based on 3 reviews
In an illustrated, informal way, this book details all the central insights of mysticism and relates them to psychological understandings of spiritual maturity: the unimportance of belief, the deep structure of religion, rebuttals of orthodoxy, cosmologies and theories of enlightenment, various practices and teachers, the mechanics of alternative healing and dreams, and more. More
If you are sick of all the fighting and political nonsense around religion, and long to experience something deeper, you are bound to appreciate how my more systematic approach endeavors to takes you to a more profound understanding that transcends language and culture.

Here’s an abbreviated Table of Contents:

PART 2: PHILOSOPHICAL UNDERSTANDINGS
Chapter 4: REFUTATION OF ORTHODOX THOUGHT
Chapter 5: WHAT MYSTICISM IS NOT: THE STRUCTURE
OF RELIGION
Chapter 6: CHOICES: THE SUPREME BEING
Chapter 7: CHOICES: AFTERLIFE AND COSMOLOGY

Appendix 1: ABOUT THE LUMINARIES
Appendix 2: MORE ON MEDITATION (INCLUDING
HOW TO DO IT)
Appendix 3: IMPORTANT PERSPECTIVES ON THE
RELIGIONS
NOTES/BIBLIOGRAPHY/ACKNOWLEDGEMENTS

I have taken pains to make the book entertaining (pictures of luminaries with interesting details, plus lively graphics) and concise. All the essential understandings are here. You’ll get a better sense of your own path in spirituality, and a deeper experience of the profound, ineffable truths that all paths, consciously or unconsciously, try to get back to. This book is FREE for a while so people will review it... please do! Enjoy!

I like to say that USPP took me 61 years to write. I was a skinny, asthmatic, ADD kid who made it through public and prep school, studied zoology and anthropology in college, worked in small-time show business for a couple of years, was a technical writer for a small computer firm, wrote a novel and had it rejected by fourteen publishers, got a Masters degree in Community Counseling, became a full-time spiritual seeker for six years in a bunch of groups, travelled extensively in India and South America, got a PhD in Religious Studies, taught successful noncredit meditation courses, got married and never had children, worked about seven years as a drug counselor in various settings while occasionally teaching yoga, meditation, and doing dreamwork, and for about ten years taught courses in religion and spirituality as an Adjunct Professor of Religious Studies.

In rough chronological order, my spiritual pedigree involves Episcopalianism, Catholicism, Transcendental Meditation, the Vedanta Society, devotional Hinduism, Sufism, Won and Zen Buddhism, and agnostically oriented self-inquiry (TAT Foundation). This book is the result of decades of personal observation, study, and experience; if I'd found anything else similar I would never have bothered writing it. I don’t know if the insights in my book will help anyone, but they sure helped me, and if I have anything to offer it's only because I’ve learned so much from so many helpers and spiritual masters, prominent and otherwise.

This is a remarkably comprehensive book that will provide those who are new to spirituality with the information they need to better understand this broad topic. It is also most helpful to those who have pursued the spiritual path for some time in that it goes into depth on a great variety of related subjects, such as the interconnectedness of our most popular religions, religious symbols and meditation techniques. Despite the serious content, it is easy to read and most interesting.

An important book for seekers and non-seekers, believers and non-believers (and for those who feel that belief isn't necessary for spirituality!). What's essential about the book is that the author is essentially non-denominational, and therefore can look at individual religions from a more honest and less biased spiritual perspective. The power of having this perspective cannot be underestimated - the author allows himself - and therefore his readers - to question everything, and to look rationally at all belief systems. I believe that writing about the _core_ of all religions (i.e., spirituality itself or mysticism) is desperately needed, and this book provides that. This is a book that asks - demands - everyone to not just think, but to think deeply, and to allow one's own belief system to be challenged. Well done!

A comprehensive resource for spiritual seekers providing clear, concise descriptions of the commonalities among all spiritualities. Each chapter stands independently, therefore the book can be used as a reference or read in its entirety from the beginning. Written in a lighthearted manner with obvious humility, I appreciated the light touch to what in many ways is very heavy material. I anticipate this book becoming a “go-to” resource for me, as well as a helpful, unbiased guide to share with other spiritual seekers wherever they are on their journey.

(reviewed 3 days after purchase)
Joan Leiby reviewed on Aug. 31, 2016
(no rating)
This book is wonderful! The author says it's a result of decades of his own observation, study, and experience. The book offers pithy, yet never superficial, insight into many, many spiritual modalities. I have been introduced to some modalities and concepts that I didn't know existed, and my understanding of some that I am already familiar with has expanded. This book will be fascinating to those already interested in spiritual matters as well as to people who think they're not interested at all.

You have subscribed to alerts for David Low.

You have been added to David Low's favorite list.

You can also sign-up to receive email notifications whenever David Low releases a new book.