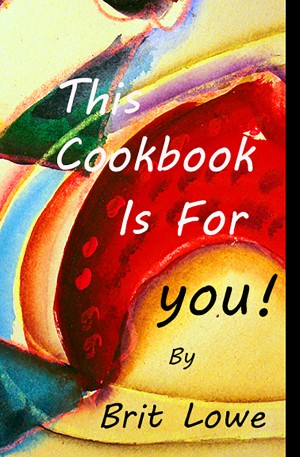 This Cookbook Is For You!

By Brit Lowe
This Cookbook Is For You! contains delicious easy and quick recipes that include the best tasting pot roast you will ever make, as well as, fun snacks for hungry kids home from school. It also contains vegetarian recipes and exciting desserts everyone will enjoy. This cookbook truly is for You! More
This Cookbook Is For You! is not only for people who think they can't cook, but also for seasoned cooks who want new and quick recipes with healthy ingredients and tips for great tasting meals and snacks which will delight and impress their family and friends.
Available ebook formats: epub mobi pdf rtf lrf pdb txt html
You set the price! USD
Buy Add to Library Give as a Gift
How gifting works
Create Widget
Tags: colloidal silver vegitarian recipes delicious homemade recipes meat dishes nongmo fun activities for kids delightful desserts tips for beginners
About Brit Lowe

I began writing when I was nine years old. I loved poems and wrote many during my childhood. As a teenager I wrote short stories. I took some of my work to my english teacher, Mrs. Norman, and she advised me to major in journalism when I went to college. I took her advice and I did major in journalism with a minor in microbiology. I began writing feature stories in the local newspaper and reporting on the crisis at the time which was the failure of the Shah of Irans corrupt government and the Iranian Savic Police torture of political prisoners. My reporting must have been noticed because the Savic Police threatened me with cutting off my hands if I didn't stop reporting these stories. Lucky for me, shortly after this the Shah was deposed and the threats were meaningless so my life got back to normal.

I switched my major to nursing and worked as a Registered Nurse in O.R. for six years and Forensic Psychiatric nursing for the remainder of my career. I never stopped writing. Nursing was my profession, writing is my calling. I just published my second book on Smashwords and have three others in the pipeline. My first book was The Truth About Colloidal Silver, by Brit Lowe. My second book is a cookbook called This Cookbook Is For You!, by Brit Lowe, using Non-Gmo ingredients and informing new cooks and seasoned cooks about the uses for colloidal silver in the kitchen. I would like to thank my readers for their continued support. Expect the unexpected in my upcoming publications. God Bless and keep reading.

You have subscribed to alerts for Brit Lowe.

You have been added to Brit Lowe's favorite list.

You can also sign-up to receive email notifications whenever Brit Lowe releases a new book.