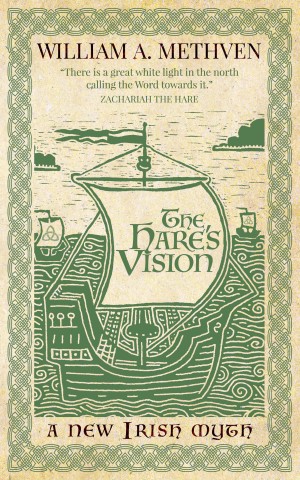 By William A Methven
The Hare's Vision is a philosophical mystery following the journey an Irish monk in 575AD from his hermitage in the Egyptian desert to Ireland with secret radical teachings delivered by Jesus while he lay dying after the crucifixion. The monk is pursued by an emissary of the Bishop of Rome as the teachings challenge the very existence of the Christian Church. More
In Jerusalem at the time of the crucifixion apostles struggle to revive Jesus from his ordeal on the cross. Jesus, fearing that his teachings will be misused to found a new and oppressive religion, lives long enough to create his final message to mankind, a manuscript known as The Word.
The Word is re-discovered in the sixth century in the north African city of Alexandria, at a time of political and religious turmoil. An Irish desert father, Cormac mac Fliande, is called upon to deliver these scrolls to Ireland; far enough away from the established church which fears the radical challenge to its authority contained in The Word. Cormac is forced to return to the land of his birth: a land he fled after the death of his wife and children in the Justinian Plague.
Cormac’s companion and muse is a mystical golden hare he met on his travels who claims to be the reincarnated soul of the biblical prophet, Zachariah. They are accompanied to Ireland by a Greek philosopher, pagan priestess and close friend, Melania, who is escaping persecution in Egypt along with a young Judaean scholar, Brother Simon. In Ireland they are joined on their odyssey by a young Irish poetess, Bretha.
However the Church in Rome wants to possess the Word and the Pope sends his ruthless emissary, the Nubean priest Father Augustine, in pursuit of Cormac Mac Fliande.

Sixth century Ireland is a mystical land where the old pagan beliefs peacefully coexist beside the new Christian religion. In Ireland Cormac and his companions are helped by Iucharba of the Tuatha De, a magical subterranean fairy folk who once ruled Ireland and Feth Fio the ferryman, a changeling who is part otter, part man. This is a world before scientific thought, where the membranes between worlds are very thin. Imagination and superstition are as real as everyday experience and the interactions between humans and the natural world are very different from today.
In this time Rome wishes to suppress all potential challenge to its growing religious power and sends its fearsome emissary, Augustine of Nubea to Ireland to find and secure The Word for the Holy See. On his way through France to Ireland Augustine enlists the support of the legendary British military leader, Artur of the Gododdin and plans are laid to invade Ireland to capture The Word.
Cormac’s mentor as a young monk was Colum Cille (St. Columba), a High Druid in Ireland. He is an eminent, but controversial abbot within the Celtic Christian church and has a troubled past for which he seeks redemption. Guardianship of The Word offers Colum Cille his own personal salvation and his opportunity to build a church that would become the salvation of western Christendom.
It is in this melting pot that Cormac, his companions and his mentor, Abbot Colum Cille must find a way of saving The Word for Christendom and for Ireland: in doing so their lives are forever changed.

Then in modern times The Word is discovered on an archaeological dig on the north coast of Ireland with few clues as to how it got there. Its discovery once again challenges those in power.

Aged 45 William Methven found himself on his knees in despair in a strange house he had just moved into after his first marriage broke up. That began his journey of discovery.
He questioned all things - his politics, his spiritual beliefs, his place in the world.
The Hare’s Vision is a culmination of that long journey. The extraordinary book uses the medium of storytelling to tackle complex issues of human relations, history, religion and politics in Ireland in particular, but more generally in the western world.
William is a former business executive and community activist. He lives in Northern Ireland where the issues addressed by the Hare’s Vision have impacted dramatically on his own life and many others..

Learn more about William A Methven

You have subscribed to alerts for William A Methven.

You have been added to William A Methven's favorite list.

You can also sign-up to receive email notifications whenever William A Methven releases a new book.